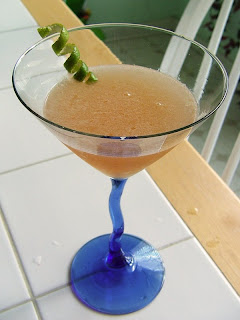 How about another Old School cocktail here at Casa Benito? This is the Pegu Club, named after a bar in Burma near Rangoon. This was the sort of drinking establishment you see in old British Empire literature. A respite from the heat and malaria and a chance to take a break from the messy business of conquering Asian nations. Kipling even wrote about it in From Sea to Sea: "The Pegu Club seemed to be full of men on their way up or down, and the conversation was but an echo of the murmur of conquest far away to the north." While he mentioned cocktails in a few places, he didn't specifically list the one named after the club.

Sadly, the Pegu Club was destroyed in WWII, but the drink lives on...

The best cocktails are those with only a few ingredients, balanced well against each other. This one is made with three parts gin, one part lime juice, one part Cointreau (I used Gran Gala), and a dash of bitters. Combine with ice in a shaker and shake thoroughly. Pour in a martini glass and garnish with a twist* of lime peel.

This is a cool and refreshing citrus beverage, which tastes somewhere between grapefruit juice and an orange push-up like you used to get from an ice cream truck. The gin goes well with the orange and lime, and it's just strong enough to make you sip slowly and enjoy it.

*To make a garnish like that, use a zester to take a long strip from the entire circumference of the lime. Spiral around the lime to make it longer if desired. Take the strip and twist it around a thin rod, like a skewer. Best done right before serving. For best results, keep the zester stationary and rotate the citrus fruit without stopping. It's easy to get a foot or more off a lemon after one or two tries.
Posted by Benito at 12:50 AM

Yer certainly right that the best cocktails are made from the fewest ingredients. when you read the recipes for new cocktails concocted by "bar chefs," as the unfortunate term is now, you have to wonder how six or eight ingredients could produce anything other than an anonymous muddle.