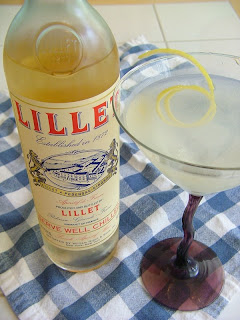 The everyday man on the street will tell you that James Bond always drank martinis. The more knowledgeable gentleman will correct this to a vodka martini, but the obsessive fan will quote the recipe for a Vesper. While I fall far short of obsessive, I was curious to try the cocktail invented by James Bond in Ian Fleming's 1953 novel Casino Royale.

When it comes to the shaken versus stirred controversy, I don't get passionate either way. I like the super-cold temperature of a properly shaken cocktail, but with others I prefer a quick stir. I'm not really concerned about bruising gin, especially considering that raw gin is something like a sledgehammer to the forehead. Speaking of which, let's talk about the recipe.

The book calls for "Three measures of Gordon's [gin], one of vodka, half a measure of Kina Lillet. Shake it very well until it's ice-cold, then add a large thin slice of lemon peel." The Lillet will stop most people on the way to the liquor cabinet, but it's an aperitif made in Bordeaux and likened to Vermouth. I find that it tastes a lot like a Sauternes without the musty underbelly of noble rot. While Lillet is delicious on its own, it is completely overpowered in this cocktail and only provides a slight golden hue and a touch of sweetness. I made this twice with double the amount of Lillet and it was still just barely in the background. 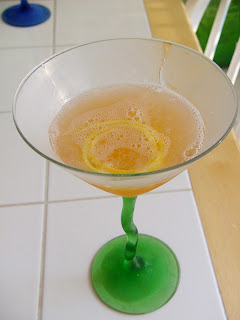 What you're left with is a lot of gin and an unnecessary boost of alcohol from the vodka. The best mixed drinks are those that combine elements of sweet, sour, bitter, and alcohol in harmony, but this one is pretty much pure booze designed for the professional drinker. I can't imagine trying to play cards after having one of these, and the first time I made this I split it with a friend and it was still too strong.

So if you're sitting around with Lillet and don't know how you're going to use it... Why not try an Old Etonian? This drink was quite popular in 1920s London and referenced the old boys' school.

Take a shot of gin and a shot of Lillet Blanc, add in a few splashes of amaretto and bitters, and shake it up. Pour and serve with a twist of lemon or orange peel. This is a far better cocktail than the Vesper, and in many ways is a lighter, fruitier version of the Manhattan. Definitely one that's going to stay on the books until this bottle of Lillet runs its course.
Posted by Benito at 12:55 AM

sir, the way you keep your properly STIRRED martini super chilled is by keeping the gin in the freezer (along with the glasses) and the vermouth in the fridge. stirring has nothing to do with "bruising" the gin; one cannot imagine where the notion came from that a liquid that's 40 or 45 percent alcohol could be "bruised."

Unfortunately I have limited freezer space, and with this recent fixation on cocktails there's a lot of bottles hanging around.

I will say that if I'm ever having a martini with a really nice gin (like Hendrick's), I'll request it stirred.

The big problem with storing your gin in the freezer is that you're not going to get the same dilution you would when mixing the drink with room temperature gin. Water (from the ice) is an important component in a cocktail, particularly one like a Martini.