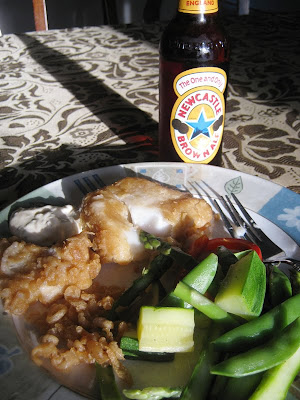 I had a bunch of frozen cod on hand, Paul had some beer and fresh vegetables, and it was a good excuse to slap something together for dinner in between a double feature of the two Grindhouse films, Planet Terror and Death Proof. For the record, I prefer the latter of the two, though both have their charms.

I made a simple beer batter with the classic Newcastle Brown Ale, often the first darker brew that people try. Folks get scared of Guinness, but can slide into the world of stouts and heavier beers with the nutty and mild Newcastle. The batter was seasoned with a little Old Bay, and I used a fork to drip in some additional batter for "crunchies", those little fried bits that are so tasty with fish. A little homemade tarter sauce (mayo + relish + Dijon + Worcestershire + cayenne), the aforementioned steamed vegetables... tasty and simple dinner. 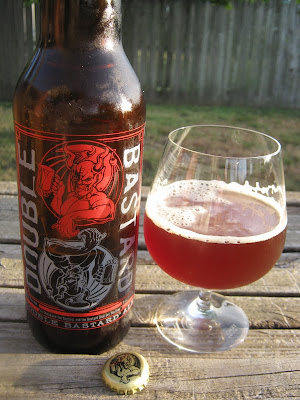 For the after dinner portion of the evening, but before Scotch and cigars, I brought along a bottle of the 2008 Stone Double Bastard. $10/22 oz., 10.5% abv. This is classified as a strong American ale, and is a heartier variation of the popular Arrogant Bastard Ale.

Rich with orange and cloves on top, but with a deep bitter finish. Seriously bitter finish--double brew some espresso and then cook it down to a thick syrup and you've got the idea. This is a powerful and complex beer, with elements of tea, citrus peel, spices, and a great copper red color. Plus, I can't stress how much I loved the strong bitterness.

This is a limited release that comes out each November in both the 22 oz. bomber and a 3 litre bottle, and anything this hoppy can probably be aged for a couple of years.
Posted by Benito at 12:32 AM

This was a great dinner, man.

Damn straight, and great job on the vegetables. Much more refreshing than the usual French fries.

Thanks for the input, I'm leaning that way myself. Or I'll split the difference and go with something from the 1910s. ;)

As for the logo, I'd go Victorian

Much appreciated. If I had the talent I would paint something in the style of Toulouse-Lautrec cabaret posters. ;)

Your blog IS a work of art

on it's own mon ami.

You need not be envious of anyone.

'Death Proof' and dark beer (two) and any food you choose is bound to please :)

You are correct there. Planet Terror is a bit gory for dinner, but Death Proof seems tailor made for dudes hanging out with a few brews.