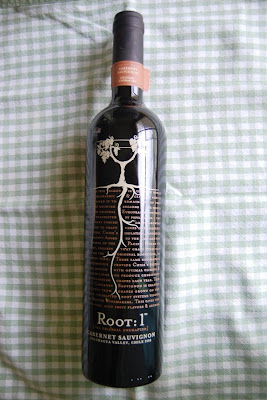 How about a bold and fruity Chilean red now that things are cooling off a little?

Initial strong cherry pie aroma, which mellows into a slightly jammy black cherry. There's a touch of tobacco and hay, with big, firm tannins. There's a tart finish that is very long lasting.

The subtitle for this wine is "The Original Ungrafted". This is a reference to the fact that these grapes came from ungrafted vines--while vineyards around the world were nearly destroyed from phylloxera, Chile remained unaffected. Phylloxera is a tiny aphid-like insect that attacks grapevine roots. Native to North America, it was introduced to Europe by mistake and nearly destroyed that continent's wine industry in the mid-1800s. The solution was to take native American rootstock (which is resistant to the bug) and graft European vines on top. Similar methods are used with fruit trees around the world, and if you want to get crazy you can grow 81 citrus varieties on one tree.

This particular wine isn't unique among Chilean wines for being ungrafted, but it does draw attention to the distinction.


Note: This wine was received as a sample.
Posted by Benito at 12:11 AM

Most of Chile's vines are ungrafted, although many growers are experimenting with rootstocks that are resistant to drought or other conditions. There are also many old vineyards that have noble vines grafted onto old rustic stock, such as País (mission), so they take advantage of wonderfully developed old roots to produce great new fruit!
Didn't know that grafting was so wide spread in fruit trees! Interesting!

Thanks for the info--I also saw a note that grafting is used in Casablanca to guard against nematodes.

The popularity of grafting modern fruit tree varieties also explains why I never managed to grow a plum, orange, or apple tree in my backyard as a kid, no matter how many seeds I buried. :)