When Constance e-mailed me about some Austrian wines from Monika Caha Selections, she said she had a "Grooner and a Zvy-gelt". That was odd, I thought--I knew she'd been over there recently and I can get by in Deutsch (even if it isn't meine Muttersprache), but I was happy to try the wines despite the English phonetic spelling. And then a few days later I received screwcap-enclosed bottles labeled Grooner and Zvy-gelt. Well I'll be a monkey's uncle! 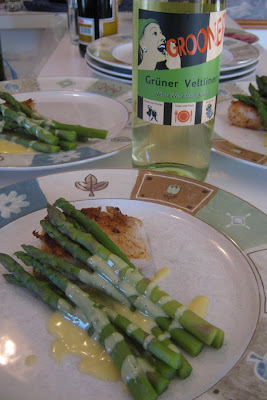 I've spoken many times in favor of simpler German and Austrian labels. I think the Austrians are doing a better job of it from what I've seen, but they're also viewed as a newer entry to the American market and have less of an established fan base to deal with. With simple, pop art-inspired labels, anyone should be able to ask for these wines easily, even if they know nothing about the Niederösterreich appellation in Lower Austria, home to both.

I really wanted to enjoy these wines with food, and so recruited Lady A and Paul as dinner companions. For the first course, I made blackened cod with steamed asparagus and Hollandaise sauce. Hollandaise is one of those things that is completely pointless to make just for yourself, but for a group of people you can put a lot of smiles around the table. I used some of the Grüner Veltliner and lime juice in the sauce.

Speaking of which, we obviously paired this with the white: 2009 Grooner, $10, 12% abv. 100% Grüner Veltliner. It's light with a lemon and green apple aroma. Crisp with tart acidity, but not too strong. It rounds out somewhat as it warms up. Outstanding match for seafood--I have a lot of Austrian trout recipes, but I had cod on hand and was anxious to cook it. It was a bit salty with the blackening spices, but delicious regardless. 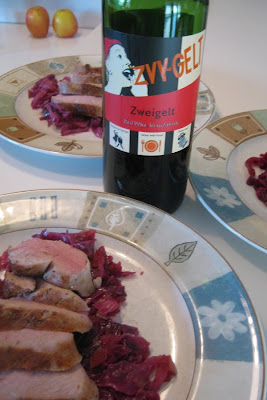 For the second course, I did something closer to Austrian cuisine. I coated a pork tenderloin with a mix of soy sauce, Dijon Mustard, and honey, and roasted it to a perfect medium, with just a touch of pink in the center. Slices were placed atop a mixture that had been braising for an hour: purple cabbage, red onion, and Jazz apples, with a bit of butter and a dash of red wine vinegar. I didn't overcook it, so the cabbage was still a bit crisp and the flavors of the ingredients were still distinguishable.

Here we opened the 2008 Zvy-Gelt. $11, 13.5% abv. 100% Zweigelt. I will quibble ever so slightly with the pronunciation here, since the German z is a sort of ts sound that takes some practice, especially at the beginning of a word. But no matter. This is a light and refreshing red wine, comparable in character to a Cru Beaujolais. Very mild cherry, soft and smooth with practically no tannins. Subtle spice and toast elements as well. Had I known it would be so gentle, I would have left out the vinegar from the cabbage and dialed back the spices a bit. The food didn't overpower the wine, but I was expecting something much stronger. As it was, the Zweigelt was a pleasant surprise and I was happy to add another grape to my list.

For dessert the always charming Lady A brought along a tasty carrot cake (Karottenkuchen) from Fresh Market with amazing icing. Usually it's just cream cheese, but I swear this had some sour cream or crème fraiche in it. Either way, it was rich, moist, and the perfect cap for the dinner.


Note: This wine was received as a sample, and the shipment included some lovely autumn-patterned table napkins that will show up in a future post.
Posted by Benito at 1:46 AM

always a delight to read your posts :) you're added education and experience make the wine that more special!

And I'm delighted to try your wines. I think this works out well. ;)

what a great write-up. thx for your thoughtful comments and kind words; we are glad you like GROONER & ZVY-GELT as much as we do, since we created them with top winemaker meinhard forstreiter.
about the ZVY-GELT name; as you can imagine, it was a cinch to do "grüner" as GROONER; more of a challenge with zweigelt phonetically. we wanted to go with the "TS" instead of the "z", as you are absolutely right, it is more accurate, but it didn't fit in the label graphics.
so anyone reading this who wants to pronounce it REALLY correctly, listen to benito and say
TSVY-GELT!
thx again, and please follow us on fb and twitter!
a link to your site has to go on our grooner fb asap!
fyi, toni is the"grooner" and "zvy-gelt" girl on the label.

It has been fun trying Austrian wines over the past couple of years as they have made their way into the American market. Grüner Veltliners have become pretty widespread, Blaufränkisch is getting more noticeable, and I even found a Roter Veltliner last year.

i don't see much zweigelt 'round these parts. Rare as a hen's tooth, as they say. Always on the lookout for lighter reds...Pinot Noir's a nice pairing companion to my penchant for heavier fish, but it is not kind on the pocketbook.

Thanks to Nouveau, Cru Boo remains pretty reasonable, and I'll keep an eye out for some ZVY-GELT!

I shouldn't be surprised every time, but I find over and over again that more obscure reds are often light and refreshing. Lebanon, Turkey, Greece, Bulgaria, Hungary...

There should be a rule of thumb that if the name of the grape would get you a massive score in Scrabble, you ought to give it a shot.