Last year three people opened a casual restaurant here in Memphis: a local, a Californian, and a South African. Called Humdingers, the first location at Poplar and Massey specializes in healthy grilled fish and chicken, with a series of sauces and seasonings built on the southern African piri-piri pepper. In a land of fried chicken and catfish, lots of people praised the restaurant's fresh, light approach. While I'd heard good things about it, I didn't actually get out to the restaurant. 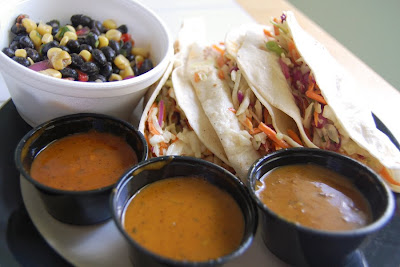 This summer, a second location opened up within walking distance here in Cordova, so I had to give it a try. I strode up to the counter and said, "Goeie middag! Ek praat nie Afrikaans nie..." Just kidding. It's the kind of place where you order at the counter and they bring the food out to your table, but there's real plates, silverware, they serve wine, etc. I elected for takeout, and got the sampler of tacos (grilled shrimp, fish, and chicken) with a side of corn and black bean salsa.

As you can see, the tacos are not topped with the Tex-Mex staples of lettuce and cheese. There's a sort of Asian slaw made with shredded cabbage, carrots, and a dash of creamy "Humdingers" sauce. I brought home the three piri-piri sauces (there is a fourth lemon pepper sauce I skipped). They are mild, medium, and hot, though all three are intensely spicy and flavorful, somewhere between a BBQ sauce and standard hot sauce in texture and complexity. The spice burst you get (again, I'm talking flavor, not heat) is similar to various south Indian sauces, so if you're not used to that kind of taste bud explosion start easy with the mild, and just try a bit. As for me, I'd like to have a few bottles around the house to slather on everything.

Among the various tacos, the shrimp is best, followed by the chicken and then the fish. Nothing's wrong with the fish, but I felt the spices worked best with the first two. Most importantly, nothing was overcooked or rubbery--perfectly cooked and tender for all three. The rest of the menu includes various grilled fish and chicken entrées, paired with fresh fruits, grilled vegetables, rice, and other healthy but tasty sides. I think what I like about the place is that it's not tied to a specific culinary tradition, nor is it just a trendy fusion place. They're simply taking quality, fresh ingredients, and combining them in delicious ways. Which is how I think a lot of food enthusiasts are approaching their home cooking these days. Does something simple like grilled zucchini really need to be pigeonholed? Does it become Indian if you dash garam masala over it, or Asian if you splash it with soy sauce, or Italian if you drizzle oil and vinegar? Who cares as long as it tastes good.


P.S. I did not get a look at the wines available, but if you're doing takeout, I'd suggest a well-chilled South African Steen (Chenin Blanc) for most of these dishes. Not just because of the connection with the piri-piri, but also because the fruit and minerality will stand up well with this type of cooking.
Posted by Benito at 12:20 AM

...looks like the location calls for dinner and a movie.

Indeed! They also have some great appetizers and other fun stuff if you're more in the mood for a snack.