I attended a wedding this weekend... And as I'm dating one of the bridesmaids, that meant that I spent most of Friday and Saturday involved in wedding-related matters. The groom doesn't drink as a general rule, and the bride is a casual wine drinker. Nevertheless, during the rehearsal dinner, we toasted the couple with Freixenet Cordon Negro Brut. In my quest for good bargain sparkling wines, I've somehow always avoided this line. Maybe it was because I could never pronounce the damned name (just looked it up and it's "FRESH-en-ette", which sounds like some sort of feminine hygiene product). Maybe it was because the bottle reminded me of some sort of similarly-packaged ghetto hooch from my childhood. Maybe I thought it was some domestic product trying to sound foreign, like the dreaded "Champale".

Despite those mental roadblocks, I was pleasantly surprised. It's a crisp and bubbly wine, with--and I hate to use this cliché--a touch of lemon squirt acidity. I only had about half a glass (there were many people at the rehearsal dinner), but enjoyed it enough that I'm going to grab a bottle on my next visit to the wine shop.

Now that I've done the research, I find out that it's a traditional Spanish cava from the Catalan region, made from the odd sounding grapes Macabeo, Xarel-lo and Parellada. I'm going to come out and admit to a lot of ignorance when it comes to the thousands of little-known grape varieties of Italy, Spain, and Portugal, even though I love their wines. I've worked my liver hard over the past few years to school myself on the main grapes of all of the major wine producing areas of the world, as well as the second- and third-tier grapes of France, but I'm delighted to know that I have many more worlds to explore.

I didn't drink any regular wine that evening. There was a cash bar, and I looked over a series of opened, probably oxidized bottles of bargain wine being sold for more per glass than the entire bottle is worth in a regular retail setting. Unless I just have money to piss away or am in a restaurant that takes wine seriously, I don't buy wine at dinner in this town. Part of it is the ridiculous taxation scheme that makes a glass prohibitively expensive, and part of it is the fact that people in this city just don't drink much wine. I'm happy to bring a bottle and pay the corking fee, though. 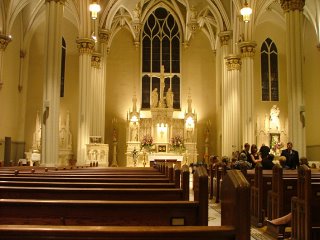 The wedding was lovely... It was held in St. Peter's, the oldest Catholic church in Memphis and the site of the first Catholic mass in our fair city. As a wee lad in 1984, I was the ring bearer for a very large Italian wedding at this place. The priest was a very friendly and welcoming man, who didn't hold my Protestantism against me. Nor did the current priest, a very young man who is an advisor at the Catholic girls' school where my girlfriend and the bride teach. (The three of them often go out to eat sushi for lunch and discuss philosphy and current events.)

At the reception, a free bar was provided with unidentified beer and three varieites of Lindemann's wine, all from 2003-2004, the Bin 40 Merlot, the Bin 50 Shiraz, and the Bin 65 Chardonnay. Sadly, I have no notes on these, even though I sampled all of them and even bumped into a friend from one of my wine tasting groups. (We talked mostly about the awesome Bell Wine Cellar selections we'd tried earlier in the day, though we'd arrived at different times.) While I don't recall any specific notes, I do remember the Chardonnay as being, surprisingly, my favorite out of the group for that occasion. None of these wines were sweet, and frankly, if I want inexpensive Aussie plonk, I'm much more likely to go for Lindeman's or Penfold's than Yellowtail or Alice White. The Shiraz and Merlot were decent enough (particularly with the beef brisket and toasted ravioli served), but the chilled Chardonnay was ideal for hanging around the sweltering dance floor and mingling with the crowd. Plus, if you accidentally splash a bit of chard on a girl's dress, it's damned near invisible compared to a red wine stain. All three of the wines were served from the 1.5 L bottles, which leads me to believe that they would be excellent selections for large gatherings of non-wine enthusiasts. My only change would be to add a bottle of their Bin 75 Riesling--that's one of my guilty pleasures, a sweeter white that is a perfect accompaniment with a traditional American Thanksgiving dinner. (With some of this and some apple cider added in, you'll have the world's greatest gravy to serve along with the turkey.)
Posted by Benito at 5:19 PM

The staff is really helpful; we brought in a cake from our preferred baker for no additional cost. The separate bar and patio area were great for cocktail hour.