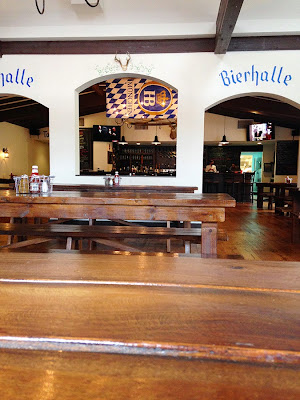 I woke up this morning and it was cold, overcast, and raining. Though in a good mood, I found myself craving old school German comfort food, and I'd been meaning to try out a certain spot in Overton Square. Memphis is not really known for its German food, and over the years we've seen places like Mary's in Collierville and the venerable but departed Erika's downtown. For years as a member of my high school's German Club, we planned a meal at Erika's but never went there, meaning that I spent a lot of time trying to figure out Sauerbraten at home from dusty recipe books.

I lied to The Bella and told her I was heading out to eat celery and eat cold soup. Off to Midtown!

The restaurant is set up in the traditional Bavarian beer hall style, and the white and blue checked pattern is painted on the outside of the building. Seating is communal on long benches, though I was by myself at my table. I can't wait to go back at some point with a group or when they're busy to enjoy the Gemütlichkeit from such an environment. You make fast friends when the beer is flowing and you're running low on mustard. 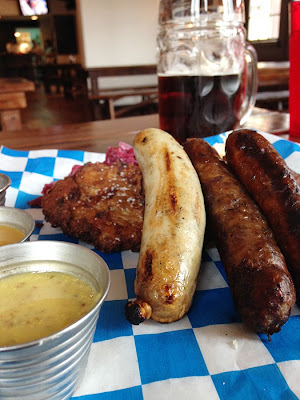 I got the Wurst platter with a half litre of Dunkel. Don't know the brand, I was just enjoying lunch and in the mood for a dark beer. The platter featured three crispy Kartoffelpuffer (potato pancakes), Sauerkraut, Blaukraut (braised red cabbage), toasted bread, and then the sauces and sausages. You can't really see the sauces that well, but we've got a whole grain mustard, a molasses-mustard blend, and an apple Jezebel sauce.

There was one more sausage--a house blend that arrived after this photo was taken, but from right to left you're looking at venison, wild boar, and Weißwurst. All were delicious but I was really excited about the Weißwurst since it's hard to come by in Memphis. Made from minced veal and pork loin it has a mild but deep flavor and goes oh-so-perfectly with certain Alsatian white wines. I tried the sausages in various combinations with the sauces and did not come out with a clear favorite, but everything was delicious and I satisfied the curious craving I had. At the time I was there, nobody was speaking German but I look forward to a future visit when I can dust off the old Muttersprache and have folks laugh at my Plattdüütsch accent.
Posted by Unknown at 3:17 PM