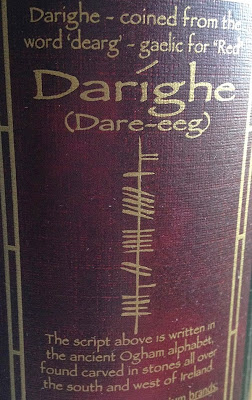 This wine is called "red" in Irish Gaelic, and spelled out in Ogham script. How it got there is a little complicated.

Orthography is how a language is spelled, using whatever alphabet. For those of us that speak English, we're fixed into the Latin/Roman alphabet of the 7th Century BCE as it was modified over the years into the Roman invasion of Great Britain starting in AD 43. Over the years, the Romans ignored Ireland, where they had no real writing system for centuries. (Though ironically, Ireland would become a powerhouse of Roman Catholicism later on.) One of the earliest was the aforementioned Ogham, somewhat related to the runic scripts like Futhark that dominated the Germanic lands in the first millennium AD. Later attempts 1300-1500 years ago to use the Roman alphabet for Gaelic ended up in crazy spellings like cnamham, the verb "to waste" being pronounced cra-van.

And thus, I am aware that, within relatively recent history, my ancestors from the British Isles hadn't really figured out writing to a degree that the Sumerians were able to 5,000 years ago, or the Egyptians around the same time, or the Chinese around 4,000 years ago, or the Hebrews about 3,000 years ago. Yet I was delighted to see the scratchings on stone pillars known as Ogham show up on a bottle of wine delivered to my house in AD 2014. It demonstrates that the human story is still being told in even the most obscure places, through languages and scripts that have not been commonly used for long before the modern era.

This is a deep Bordeaux blend made in the Pacific Northwest. Upon slicing away the black wax seal, it opens up with rich aromas of leather, coffee, chocolate, and blackberry. On the palate I experience medium tannins with muted dark fruit flavors and a long, complex finish. Highly recommended with a well-seasoned heritage pork chop, though like many wines in this category it will perform well with a few friends in a living room sipping and having long discussions about shoes and ships and sealing wax and cabbages and kings.

Note: This wine was provided as a sample for review.
Posted by Unknown at 4:19 PM

Leave it to you to find out more than I knew about my client's wines. Great background!