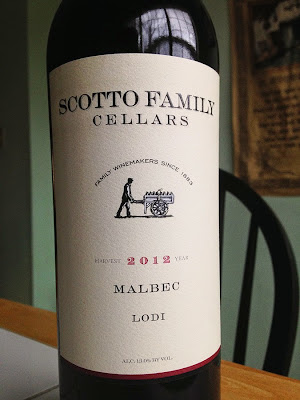 This is my third review of a wine from the Scotto winemaking family of Lodi. First I tried the 2011 50 Harvests Cabernet Sauvignon, followed by the 2012 50 Harvests Meritage. Though it was also fun to try the younger generation's hard cider (and one of those guys, Paul Scotto, made this wine). This is also a continuation of my exploration of the wines of Lodi. While I'd obviously enjoyed Lodi juice for years (whether I knew it or not), my perspective changed a lot after my visit to the region last April. There are so many interesting things going on there right now, and it's amazing to watch as Lodi makes a push for national recognition and achieving the true potential of their historic vineyards.

This particular bottle is of a specific category that always makes me do a double take, or check the label carefully: California Malbec. Granted, the grape was widely used for table wine production in pre-Prohibition days, but modern domestic production didn't really start ramping up until Argentina made the grape popular in the 1990s. It's still not something you see a lot of despite the more traditional use of Malbec for blending Meritage.

Much has been said about the trendiness of Malbec, but hipsters have a unique opportunity to carve out a niche when perusing the wine list. "Sorry, but do you have any... California Malbec in the cellar?"

Part of the reason for the current popularity of Malbec is that it's a fairly easygoing, fruit-forward wine that also happens to be generally quite affordable. Your $15 Malbec from anywhere is probably going to have a better quality-price ratio than a $15 Pinot Noir. This bottle shows aromas of dark berries with a touch of chocolate. On the palate it is smooth with a little bit of a tart finish. Though fruity, it does not veer into sweetness and instead has a rather interesting aftertaste of plum and a hint of earth.

A Malbec like this will pair with a wide range of foods, but since I'm currently sitting here in below freezing weather with sleet pinging against the windows, I think it would be great with a nice heap of BBQ brisket. Some may think that I'm violating my Memphis heritage by wanting to eat what Texans consider BBQ, but the reality of the situation is that most places around here do a pretty good brisket in addition to our region's more well-known pork ribs and shoulders. Memphis beef brisket: a curiosity to pair with California Malbec.

Note: This wine was provided as a sample for review.
Posted by Unknown at 12:30 AM