I received a set of five bottles from Jacob's Creek, produced by the large Orlando Wines based out of the Barossa Valley in South Australia. While grapes have been grown along the banks of Jacob's Creek for 150 years, the first wine under that name was a Shiraz/Cabernet/Malbec released in 1976. All of these wines are from the Reserve series, and represent almost the entire product line (only the Merlot was missing). I had five wines representing popular varietal grapes, and I could have just tasted them on my own in front of the computer. Or... I could have taken it as an opportunity for a dinner party. Paul graciously offered the use of his house, I invited various lovely young women, and began cooking late on a Saturday afternoon. 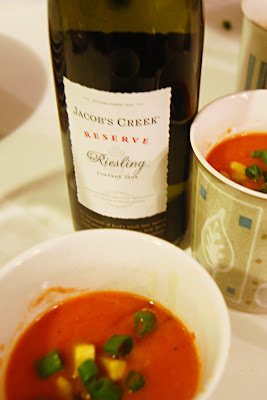 After the appetizers and a little non-related sparkling wine, it was time to pop open the 2008 Jacob's Creek Reserve Riesling ($14, 12% abv). I was surprised to discover a dry, very mineral white wine with a touch of petrol and wet rock aroma. I hadn't read the information sheets ahead of time (I always do that after tasting), and was pleasantly surprised. Very light and refreshing with a mild fruit profile of pineapple and melon.

Since it's still chilly out, I started out with a warm soup course. Tomato soup doesn't get a lot of respect. It's either the early bird special for old folks or is transformed into a "bisque" even though it contains no seafood. It's the easiest thing in the world to make as long as you use good whole canned tomatoes, sweet onions, chicken stock, and butter. I finished mine off with satuéed diced yellow squash (adds texture and flavor) and a splash of sherry. 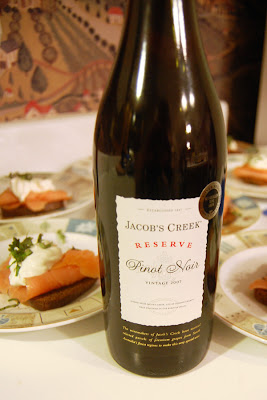 Next up was the 2007 Jacob's Creek Reserve Pinot Noir ($14, 13% abv). Delicious aroma of overripe strawberries, light berry flavors and tannins with a medium body and a short finish. For a hotter region I was expecting a much rougher wine, but this was quite nice for the price. And good Pinot Noir always goes well with salmon, hence the accompanying dish.

This is a repeat from my Burns Night dinner, but I felt like making it for a new crowd. Toasted dark rye bread, a thin smear of Dijon mustard, smoked salmon, sour cream, and a chiffonade of basil (though fresh dill would be great here when it's available). It's an open-faced sandwich or Smørrebrød in the Danish style. It was well-received around the table and one diner in particular considered it her favorite course of the evening. Many wanted to make it for breakfast in the future, I want to explore more open-faced sandwiches in 2010. 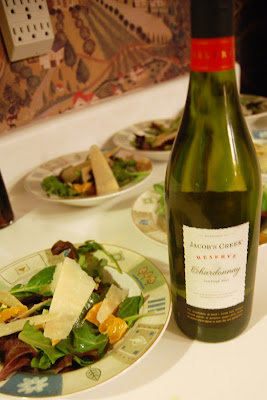 During the bridge section of the evening, I elected for a salad with the 2007 Jacob's Creek Reserve Chardonnay ($14, 13.5% abv). Fascinating aroma, with bits of mint, apricot, pear, and floral elements. The flavor was light and dry with medium fruit and a lingering finish.

Just a simple mesclun salad with segments of tangerine, shaved aged Parmigiano-Reggiano, and a vinaigrette made with sherry vinegar. The cheese had reached that nice point where it was crumbly and had little crunchy specks of calcium crystals. Oh so delicious. I went for a fairly tart dressing, but the sweetness of the citrus fruit and low acidity of the wine balanced everything out.

Lots of my first time guests are surprised at the appearance of a salad in the middle of everything, but in the Italian style I think it helps clear the palate, aids digestion, and avoids a tendency for dishes to just get increasingly heavier over the progression of the evening. 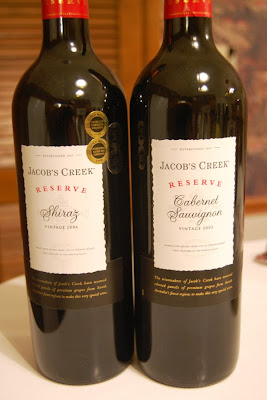 Finally time for the stronger reds, which provided interesting contrast against each other. The 2006 Jacob's Creek Reserve Shiraz ($14, 14% abv) is a classic example of an Australian Shiraz without going overboard. Plum, black pepper, spicy aromas and flavors with a short finish. Mild cherry flavors appeared on the aftertaste, and about half the table preferred this wine.

The other half voted for the 2005 Jacob's Creek Reserve Cabernet Sauvignon ($14, 14.5% abv). Strong in the Bordeaux style, this wine is. Enchanting vegetal aroma of green bell pepper, tomato leaves, tobacco, and leather. Flavors tended towards the herbal with notes of black cherries. It was definitely my favorite of the evening, and is a tremendous bargain. Like the Shiraz, this was matured in French and American oak and the past five years have been extremely kind to it. 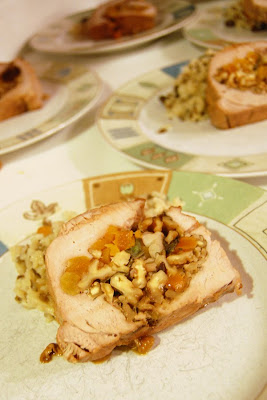 For the main course accompanying the big reds I took a four pound boneless pork loin and carefully sliced it to create a sheet of pork about half an inch thick. I laid down a stuffing of chopped dried apricots, walnuts, fresh sage, and roasted garlic. I rolled it up, tied it, and roasted it for about an hour. In the future I'll soften the dried fruit with white wine and add some salt pork or bacon, and reduce the cooking time a bit. The final product was a great balance of sweet and savory but a little on the dry side. The roulade or braciole technique is something I need to work on. I want to get that perfect spiral with an even filling. I also made a risotto with arborio rice, wild rice, cremini mushrooms, and chicken stock.

For dessert, Laura M. prepared a delicious homemade pound cake with a strawberry-Cointreau sauce. I was in heaven, and forgot to snap a picture.

It was yet another successful dinner party, catching up with friends I hadn't seen in a while, getting an opportunity to share bottles of wine with a group that had a wide range of wine experience, and mostly just the chance to have fun on a rainy weekend night.


The Jacob's Creek wines were provided as samples.
Posted by Benito at 12:37 AM

Your dinner party sounds like a scene from a movie -- great food and wine, and good comrades to enjoy it with. Which reminds me, I have GOT to try making a pork tenderloin. It's on the list of things to try, but I just haven't gotten around to it yet. I'm feeling inspired now, though. :)

It was indeed a fun night. I was exhausted the next day.

I've cooked a bunch of tenderloin and whole loin, and I prefer the whole loin. But then again, you don't always need 4-5 lbs. of leftover pork.

Dang...I so hope I get invited to one of these some day

Give me three or four weeks' notice if you're ever in town, and I'll try to hook something up. We'll try to stick to French wines for the evening. :)