Benito vs. the Pizza Kit

I think I need to kick off BWR Year 6 with some haute cuisine. 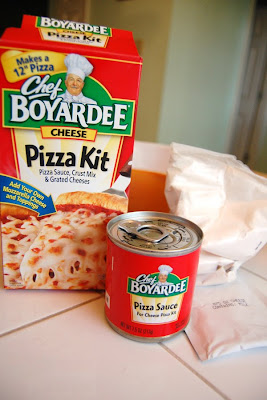 A link from the Serious Eats blog led me to a collection of vintage pizza kit ads. While those beauties hail from the 50s and 60s (during which cheese was apparently a dangerous and scary topping), I remember the boxes fondly from the early 80s. The pizza kit occupied an interesting niche: better than the frozen pizzas of the time, but not as good as delivery/restaurant pies. They were also fun to make, since you got to play with the dough, spread the sauce, and lay on the toppings.

There was another type that I haven't seen since then, sold by some schools for fund raising. A few weeks after placing your order you got a set of blank crusts, packets of sauce, and various toppings, all of which were supposed to go in the freezer. Not only did the basic 8-pack fill up your freezer, but you inevitably ran out of cheese and sauce by pizza #6, and a bag of grey sausage pellets would linger behind the frozen corn for years.

Around high school when I was going crazy with bread baking, I made real homemade pizzas and experimented with lots of different ingredients. I still do it occasionally, though the local master in this regard is Fredric with his Saturday night pizza & movie tradition that's been going on for over 10 years.

I've had wood- and coal-fired pizza in trendy bistros, deep dish pizza in Chicago, crazy variations around the country, and I've even had it in Italy. The strangest was probably a funky Gouda/Edam pizza made at an Italian restaurant run by Ecuadorians in Amsterdam. But those goofy ads ignited a craving that had been lying dormant for nearly twenty-five years.

On my next visit to the grocery store, I grabbed a box of the Chef Boyardee Cheese Pizza Kit. I played it straight by the directions, and only added some shredded American-style mozzarella cheese since that's what we did when I was a kid and it's a permitted variation by Chef B. No artisan goat cheese, no Moroccan lamb sausage, no dash of truffle oil on the finished product. I even used the same glass bowl and banged-up stainless steel pan, part of a set of random cookware I inherited when I moved out of the house. With luck, I could recreate the exact flavor I'll always associate with trying to time the pizza to be ready just as soon as ABC would begin showing a James Bond flick on Saturday night. 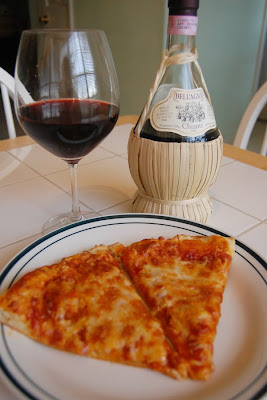 The finished product faithfully replicated those memories, so much so that I managed to burn the roof of my mouth like I did every single time as a child. The crust is biscuit-like and soft, the sauce is distinctively tangy and sweet... just as I remember it. With the wisdom of experience, I do recognize that this is salted all to hell, the tragic flaw of all processed foods (which I rarely eat these days). I like salt, but I also like to control it.

What wine to serve with this meal? I needed something that would have been easy to get in Memphis in the 1980s and would be a natural match for a 50s-style pizza. Only five seconds of cogitation were required to arrive at the perfect match: Chianti in a straw basket (or fiasco bottle).

The Tuscan 2007 Bell'agio Chianti from Banfi retails for around $10, 12.5% abv. and is made from 90% Sangiovese with the remaining 10% comprised of Canaiolo Nero, Trebbiano, and Malvasia. Interesting woody nose, with cedar and pencil shavings. Medium body with a dominant black cherry flavor, firm tannins, and a long finish. Just a touch of bitterness from the tannins, but the sweetness of the tomato sauce balances that out.

It's not the greatest Italian wine I've ever had, but it's solid, drinkable, and affordable, the kind of wine that would show up in a Billy Joel song.
Posted by Benito at 12:19 AM

Man to I remember these things!!! My Mother made these on "special Nights" when my Dad was working! thanks for the memories my friend..

I remember getting really excited when we made these back in the early 80s, but I've just never thought of them in the past 20 years. I'm amazed at how many other people get all nostalgic over something silly like this.

I'll also note that it's not a bad way to learn a couple of things: how to work with dough and how to avoid putting too many toppings on a pizza.

I could never get the stupid dough not to rip as a kid. And does it still come with just a little packet of Parmesan-type cheese?

Lately (and I don't know if Publix stores are in Memphis), I've been getting ready-to-punch down and toss dough from the local supermarket, making homemade sauce, and knocking out some killer pies. Will try to make my own dough when terror of baking subsides.

Oh yes, just a tiny packet of the sort of powdered cheese commonly found in the green can. Good old shakey cheese.

No Publix here, but the Farmer's Market and a few other places sell pre-made dough that's popular. It's fun and easy to make at home if you've got the time and feel like playing around in the kitchen. Alton Brown's method is probably a good starting point.

I forgot to include a link in the above post, but in 2008 I wrote about cooking homemade pizza in a blazing hot cast iron skillet for a seriously crispy, thin crust.

I totally admire your resolve in not adding additional "fancy" toppings like say, some good Italian cured meats, or something equally savory.

Food nostalgia is a very, very powerful thing. I know for me, as much as I love the gourmet, absolutely-to-die-for mac & cheese I frequently get at one of my fave restaurants in town, I still love the Kraft version, just love! I remember so well my Mom making it to go with her meatloaf when I was a kid. Sigh, good times.

Brilliant, brilliant article, Benito. I'm laughing and clapping even as I read it. Well done, sir.

I think the old blue box Mac & Cheese was one of the first things I learned how to cook, because my brother and I loved it but Mom thought it was revolting. Later I learned of its cult status in Canada, where it's known as "Kraft Dinner" because of the lack of actual cheese in the product.

Still, there's something wonderful about it fresh out of the pot, when it's nice and creamy and the pasta is just right. Shame that when reheated, it becomes a rubbery, grainy pile of failure on a plate.

Seriously man, we're making a couple of these this weekend.

great post, bless your heart! and the perfect wine for accompaniment. it's amazing that Banfi still makes this nostalgia-tinged Chianti available.

When it comes to bargain Banfi juice, I'd pick the Centine over this wine. And really, there's a lot of other $10 Italian reds that would out perform it. But the combination of silly 50s faux Italian and a straw-bottom bottle was just too much to pass up.

Ben
These pizza mixes go back to your grandmother in 1962 when we moved to Memphis. I bought two of them about a month ago and now keep them in the pantry. Agree on the salt.

I'm thinking it's not a bad thing to keep in the pantry. Doesn't take up a lot of space, good way to use up leftovers in the fridge...

Somehow, for something that looks like Campbell's soup, the tomato sauce is the best part of the whole kit.