The latest dinner party ended up being a bit smaller than expected due to some cancellations and conflicts. While some part of me wonders if I've scared people off with obscure critters and organ meats, a five-person dinner is a better platform for trying some new recipes and techniques. In the worst case scenario, you can just ditch it all and order a pizza, and everyone goes home happy.

I decided that I wanted to do a Southern dinner with white wines, but with a twist: the recipes would come from everywhere but the South, and the wines would be lesser-appreciated grapes. 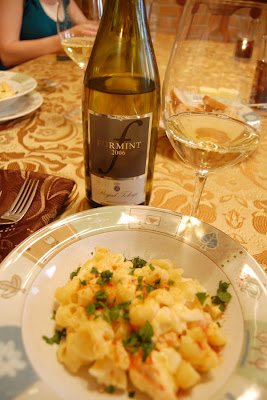 I've made homemade macaroni and cheese lots of times--stovetop, baked, different cheeses, etc. But a few years ago in Boston I had it with lobster, and fell in love. (The various seafood casseroles up there are seriously incredible comfort food in the winter, and for a poor lost Southerner experiencing his first Massachusetts December, it was a way to stay sane.) I grabbed a pair of big rock lobster tails from Costco. I boiled them for about two minutes just to be able to remove them from the shells, and then threw the shells back in the water to make a very thin lobster stock. I roughly chopped the tail meat and put it on ice while getting everything else ready.

I made a Béchamel sauce with half & half, and whisked in 8 oz. each of Fontina and aged sharp cheddar. I fished the shells out of the water and used that to boil the macaroni, drained the pasta, threw everything together in a buttered dish and evenly distributed the mostly-uncooked lobster. I topped it with a little grated Dubliner cheese, and baked for about half an hour. Delicious, and certainly a crowd pleaser.

I served it with the 2006 Royal Tokaji Furmint from Hungary by way of dear friend Thomas R. $18, 14% abv. Smoky, musky, just a touch of honey, peach, and lemon but with restrained acidity. Long finish for a white wine, one that keeps you thinking for a while. I've only had this grape in the super-sweet forms before, and it was amazing to taste the grape in a dry presentation. If you ever get the opportunity to try a dry Furmint, don't pass it up. 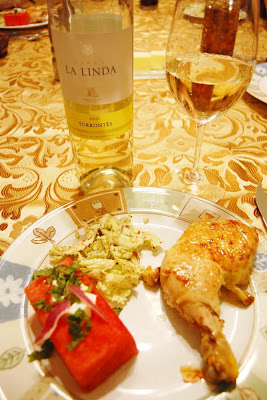 Pollo al mattone or "chicken under a brick" is a traditional preparation in which chicken is cooked with a brick on top of it. Unlike the allegorical names of some Chinese dishes, Italian ones are pretty straightforward. I'd never eaten it or made it, but figured why not give it a shot? These "Cornish game hens" were gigantic like the two kids on the Little League team that are a foot taller than all the other players. Faked birth certificates, growth spurt, or steroids? Regardless, they were pretty tasty. My heat wasn't high enough, so the skin didn't get crispy, but the leg quarters ended up with a flavor and texture similar to duck confit.

We've got an Italian chicken in place of regular fried chicken... how about an Asian-inspired cole slaw and a Greek watermelon salad? The former is #20 on a recent list of 101 salads written by Mark Bittman. (He doesn't give proportions, so have fun figuring out the assembly.) Napa cabbage, radishes, and a peanut-cilantro dressing. Pretty interesting. I've made the Greek thing before, but it's a lot of fun--feta and mint with fresh watermelon and red onion. You can play around with this and present it in many different ways.

For the wine, I picked the 2008 La Linda Torrontés from the Mendoza region of Argentina. $11, 14.1% abv. Lime zest, lemon curd, and the most wonderful floral aroma you can imagine. Full of lilies and daisies and other white flowers. Low acidity, smooth body, and a refreshing finish. One of the guests referred to the grape as South America's Viognier, and I agree--with a good example of either it's like walking into a garden and taking a deep breath.

By the time Grace brought out her cheesecake, we had consumed wine from two countries and dishes from four unrelated culinary traditions, but the overall meal was still recognizable to any attendee of a church potluck dinner. And nobody went home hungry, always the sign of a successful dinner.

P.S. Bonus photo of me with two of the guests after dinner.
Posted by Benito at 1:06 AM

Lobster mac and cheese is the new definition of comfort food.

As good as it tasted, the next time I do this I'm using a frozen bag of crawfish tails. They're a better size and the flavor will be equivalent, plus it will be a lot easier to make.

Gonna save the lobster tails for the grill or beside a rare 6 oz. filet.

The silkie chicken was good in soup, but I'll admit that this was light years beyond the quality of a ten year old MRE. The macaroni & cheese--originally just an idea for a first course and a way to demonstrate proper sauce Mornay technique--turned out to be the hit of the evening, and the one people keep talking about.

I have been dismayed in recent years as the size of cornish hens has crept up into the smallish chicken category, and good luck finding a three-pound chicken. I don't know why it's happening, but the oversizing of poultry must stop.

I was shocked when I opened the plastic; it was almost like the bird was packed under pressure or something, because it seemed to expand.

At least it's easier now to get quail. And I've been tempted to grab the mourning doves that are fascinated by my bedroom window and love making noise.

What a great dinner! The Furmint sounds intriguing. I confess I've never had one. Thanks for the tip. It's amazing how there is always a new experience with wine waiting to be had. There are over 8,000 wineries in the world. That means it's possible to drink a wine from a different winery everyday for 22 years!
Great post!

The Furmint was a bit of a find, and I very much like it--reminds me of Gruner Veltliner in some ways, but is spicier. It seems that there is an explosion of alternatives to Chardonnay emerging in the white wine world, and I can only say, yay!