Since this has inadvertently turned into "Week of the Weird" here at BWR, I thought I'd wrap things up with one of the most unusual looking animals I've ever cooked. 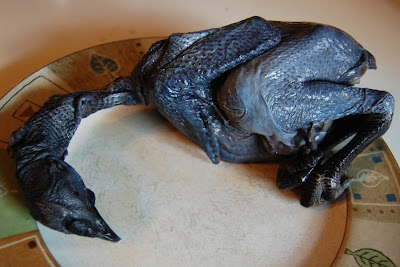 This is not a crow. This is not a baby dragon, or a demon, or some sort of burned lizard. This is a silkie chicken that has a number of unique features: feathers that turn into fine, silk-like fur; black skin, bones, and dark meat; and five toes instead of the customary four. When unfolding the bird out of its plastic package, I wasn't expecting the feet, and one of the claws gripped my finger. The dogs, alas, are not used to me yelling expletives at food, and were perplexed.

They're popular as pets and show chickens, have an interesting history, and are useful to poultry enthusiasts for the fact that the hens will happily sit on any eggs that need hatching, regardless of origin. Because there's very little meat or fat, these aren't eaten often in the West but are popular as the main ingredient of medicinal soups in China. Some modern research has been done in regards to these health claims.

There's no one recipe for such soups, in fact there are hundreds. Most of them read like something out of a Harry Potter novel, and the list of ailments that can allegedly be cured by this chicken is huge and often embarrassing. My favorite is "inducing labor". 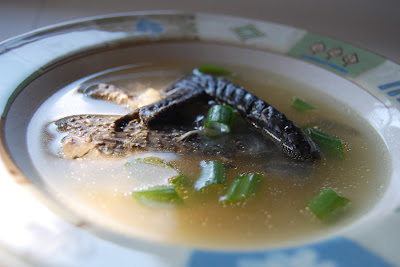 Without a standard recipe, I followed the only common theme (put a whole silkie in a pot of water) and added a few traditional ingredients that sounded good. A whole head of garlic, a cubic inch of shredded ginger, peppercorns, salt, and a little sliced green onion for garnish. Let everything simmer for a few hours, strain if you want but be sure to return some of the flesh, skin, and bones back to the bowl. You don't want anyone to think you're serving fake silkie soup, do you?

The meat is a little dry and not particularly flavorful--think about a cross between the breast meat of turkey and something like pheasant. It's not something I'd really recommend unless you're into Traditional Chinese Medicine, or like me, you treat your kitchen as a sort of culinary Noah's Ark. There might be other uses... Do you have a picky child at home? Throw down two plates, one with a whole silkie on it and load up the other with vegetables. Suddenly broccoli never looked so good.
Posted by Benito at 12:48 AM

Never wanted a grilled cheese so bad in my life...that thing looks just bloody horrid. Thank you so much for giving that a shot...you know, so I don't have to! I would have run screaming if that monster grabbed hold of my finger...shudder.

I'm not going to lie, I paused for a moment before going ahead with this whole thing. But I figured, what the hell, you only live once, and why not give it a shot?

It is pretty clear now, though, why you'll never see a Crispy McSilky Sandwich at McDonald's.

Throw down two plates, one with a whole silkie on it and load up the other with vegetables. Suddenly broccoli never looked so good.

I don't have kids, but if you try this with your own children, let me know the results.

To any other parents out there, this thing looks eerily like the blue-black dragon from Eragon. I think the CGI team must have taken a trip through Chinatown at some point.

I think you should re-visit the silkie around October 31st.

Perhaps Halloween 2010. I'm not desperate to cook this again. :)

You need to do some mac and cheese with meatloaf. Time for comfort foods and pleasing to the eye.