When I was a child, Mom had a strict rule against horror movies. It wasn't a religious thing, or an attempt to prevent my brother and me from being scared, she just pointed out that they were stupid and fake. In my teenage and young adult years, when I finally got around to seeing things like Nightmare on Elm Street, I was bored out of my mind. When I saw The Blair Witch Project, I thought, "Geez, there was no projectile vomiting, venomous snakes, hypothermia, lightning strikes, and nobody got stranded in the desert for several hours. I did scarier camping when I was 12."

But if you want real terror, the kind that keeps you up at night and pesters you like an itch inside your skull that can't be scratched, read some history.

Imagine that your family has been making wine since time immemorial. You move to the United States in search of better opportunities, and establish a successful winery. And one day, the government comes in and opens all your wine barrels, letting thousands of gallons spill out onto the dirt and into the local water, killing fish and staining the earth. 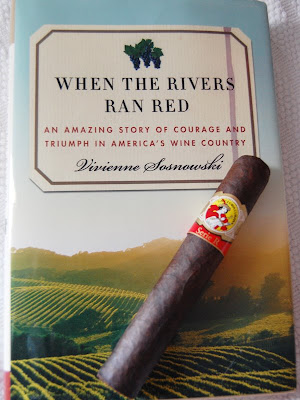 That scene, played out dozens of times in the 20s, serves as the inspiration for this book's title: When the Rivers Ran Red: An Amazing Story of Courage and Triumph in America's Wine Country by Vivienne Sosnowski. This is more of a history book than a romantic wine book; the end notes are frequent and detailed. It answers a lot of questions that I had about the time period, such as the use of wine in Catholic and Jewish tradition. (Wine was allowed to be produced for this purpose, but after the number of rabbis with Irish names exploded overnight, the government started cracking down.) There was also a strong trade in homebrewed wine--amazingly, you could make up to 200 gallons of it on your own, leading to a brisk trade in raw grapes. But the supply chain logistics of the time made it difficult and often unprofitable for the grape growers, and it's likely that the wine produced in New York basements was of dubious quality.

A lot of the book focuses on Italian immigrants in Napa and Sonoma, and the tenuous relationship with the authorities of San Francisco. There's the inevitable bribery and bootlegging, but in northern California it appears to have occurred without organized crime or violence. Prohibition tends to conjure up images of Chicago gangsters, Caribbean pirates, or Southerners running from the cops in souped-up hot rods, but California wine country seemed to operate fairly peacefully on a process of fake licenses, hidden wine tanks, and a few well-placed dollars.

I was born in 1976, and in my lifetime I've watched wine go from something that only snooty people drank in movies (or something that regular folk only had on a special occasion) to a beverage that's increasingly appreciated by people of all walks of life. With only a generation of Prohibition nearly a hundred years ago, the impact to the American wine industry was severe and is still being felt today. I can't legally buy a bottle of wine on Sunday and there are all sorts of arcane rules I have to follow. If I visit my brother in Mississippi, just 15 minutes away, and he gives me a bottle of wine, I can't legally bring it back into Tennessee. I could go on and on about our Byzantine series of rules against anything stronger than Coors Light, but the point remains that in much of the country wine is still viewed as a dangerous, evil beverage that must be controlled and contained. There are dry counties within an easy drive of my house; it wouldn't surprise me if some of the neo-prohibitionist movements are able to capture an entire state again.

Speaking of substances that could be made illegal in the future... the cigar pictured here is a La Gloria Cubana Serie R #6, 5⅞" x 60, Connecticut wrapper, Dominican and Nicaraguan filler. The first cigar I ever purchased that came with a verbal warning from the tobacconist: don't smoke this on an empty stomach. It's also the darkest cigar I've ever smoked--deep mahogany, almost black, and slightly oily. Strong and full-bodied with flavors of espresso, chocolate, and cinnamon. It burned a bit hot, but as I slowed down it softened out. Cigars are a lot like coffee (and wine for that matter), in that sometimes you're in the mood for something light and refreshing, and sometimes you want something strong, powerful, and complex. This definitely falls into the second category.
Posted by Benito at 12:13 AM

Cigar and Port always seems to work well for me after a long summer day...of course those two with a poker game work well also.

Can you tell the difference between where the fillers come from? I certainly can't!