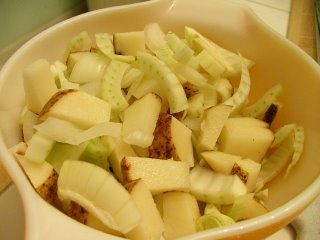 Yet another Les Halles recipe... As winter draws near, it's getting colder, and it's time for soup. I used canned tomatoes for this recipe, and while it was simmering away I was working in the garden, cutting down my tomato vines and preparing the former patch as a compost pile in order to enrich the soil for next year.

It's a pretty simple soup that begins with an odd mirepoix: a small onion, a small potato, and a big bulb of fennel. I've run into some problems buying fennel around here--not in finding it, but the people working checkout never know what it is. One local chain has it labeled as "anise", which is fine, but once after telling the checker to look for fennel or perhaps finocchio, she finally found a little tag on the bulb with a number, keyed it in, and said, "For future reference, it's called 'anise'". Except she pronounced it anus, which drew some strange looks from the other folks in line.

Beyond that, the rest of it is just chicken stock with a little dash of herbs. Let it simmer for an hour, and then blend before serving. Couldn't be simpler. 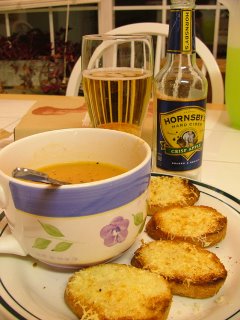 Here's the final product, with a little cheese toast (grated Sonoma Dry Jack) and a bottle of Hornsby's Crisp Apple Hard Cider. There's not much information out there about this cider--it's made by a Gallo company, and I'm pretty sure it's made with Golden Delicious apples (or something close), but it's a nice little hard cider. It avoids the vinegar aromas that you sometimes get with hard cider, and instead focuses on a bright and sunny flavor.

The soup was a big success, especially since the dominant flavor is fennel with tomato as a supporting flavor. Fennel's not something I eat all the time, but I crave it once in a while. I really wanted to leave out the potato from the recipe, but it turned out to serve two important functions: it provided texture as well as a creamy appearance even though no cream was used in the recipe.

Postscript: I often publish these articles a couple of days after I write them or fix the dish. I like to have some time to look over what I wrote, and also I appreciate the "leftover quotient" of certain dishes. As a bachelor with a roommate of limited palate, I often end up eating my own cooking for days afterwards. This soup holds up quite well on the second day, though I elected to freeze a liter of it for use later in the winter. I've still got a bowl's worth sitting in the fridge, and look forward to consuming it alongside a club sandwich or similar fare.
Posted by Benito at 11:36 PM

Thanks for the inspiration! I was trying to pick a wine to go with a tomato flavored soup to be served at a wine dinner and the picture of your soup with cheese toast helped me make up my mind.