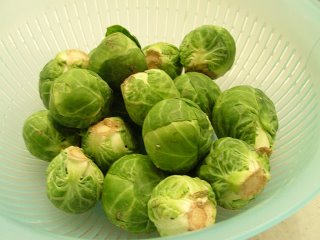 I'm amazed at all of the various members of the cabbage family that are essentially the same plant, much in the same way that a Great Dane and a Chihuahua are the same subspecies of wolf: broccoli, kale, cauliflower, collard greens, kohlrabi... There's a dozen more, but today I'm focusing on the Brussels Sprout.

I never had to eat this as a child, which meant that I never had any particular love or hate for it. Maybe my parents didn't like the sprouts, or they just never got around to fixing them, and I've never seen them in restaurants, but I've made it almost three decades without tasting the little green orbs. I say almost because last year I boiled up some, tried to eat them, and found them horrendous. However, I recently learned that some Yankees enjoy Brussels Sprouts as a Thanksgiving side dish. The secret: bacon. 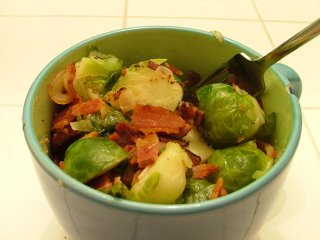 Going by a Yankee recipe, I cooked three strips of bacon and set aside the meat for topping at the end. (A note on this: my local grocery store has incredible thick-cut bacon at the butcher counter. I'm notorious for buying only three or four strips at a time. It's more expensive per pound, but the quality is much better and I don't normally buy bacon unless it's for a recipe.) A shallot went into the bacon fat until clear, and then I tossed in the sprouts (washed, trimmed, and halved on the longitudinal section). Cooked for a while, added some chicken broth, and let simmer until tender.

Wow. Granted, the salt and savory flavors from the bacon and broth really help, but something about the preparation brings about an essential sweetness of the Brussels Sprouts that's rather nice. While these were cooking, I made a batch of turkey meatballs... ground turkey, breadcrumbs, sautéed mushrooms, egg, a dash of the leftover fennel & tomato soup, and a little soy sauce. Baked until nice and brown.

I know it's an odd dinner. I had this for a late meal and found it pleasantly filling and delicious.
Posted by Benito at 9:02 PM

(P.S. I love your blog, Benito. Reading about cooking, wine, and cocktails is my guilty internet pleasure. I'm a brand new Benito-blog fan.)

We always have Brussels sprouts for Thanksgiving, cooked much as you describe in this post. Alice Waters has a pasta recipe in her vegetable cookbook that uses the tender inner leaves of the Brussels sprouts lightly sauteed in olive oil and tossed with red pepper flaskes and (I think) a little onion or shallot. Delicious.
(By the way, my eating and drinking blog should debut this weekend; I'll send you a link.)

Thanks for the info, and keep me posted on your new site. Though I've never been to Chez Panisse, I admire the Alice Waters philosophy and was thinking about her a lot this past summer as I grew my own tomatoes and went to the Farmer's Market with a more critical eye.

Back to the sprouts, earlier in the year I made a variation on navarin d'agneau, a French stew using tiny potatoes, baby carrots, pearl onions, young fennel, and lamb. I'm tempted to find some other dish that could incorporate Brussels sprouts as "the veal of cabbage".

Benito, Brussels sprouts are wonderful roasted. Trim off the woody ends, split any particularly large ones in half, toss with a few dribbles of olive oil and a little kosher salt.

Put them on a baking sheet or dish in a 425 degree oven for about twenty to twenty-five minutes. Some outer leaves will brown or even blacken. Dust lightly with a little more kosher salt and serve. They are wonderful cold the next day, as well.

A variation is to add a bit of chopped rosemary, or a few drops of balsamic vinegar. Great eating.

They are also wonderful plain, properly steamed, but it takes practice to find the exact degree of doneness.