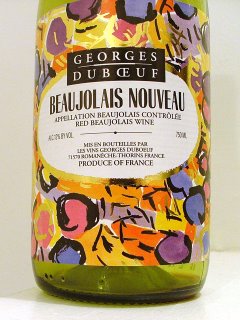 Every year when this comes up, there's a mixed response... Some serious wine drinkers avoid it entirely, not giving into the marketing hype over an admittedly simple wine. And then there's the Beaujolais fanatics, who dislike Nouveau but obsess over the crus (and to be honest, I love a good Fleurie or Brouilly). And then there's those who say, yes, Beaujolais Nouveau is nice, but not until February or so.

As for me? It's a fun seasonal beverage, a way to celebrate the harvest with one of the first wines of the year. Granted, I'm not a French grape picker receiving my ration of quickly made mild wine, but a feller can imagine.

I've been to Nouveau tastings before, but I generally just stick with the old standby: 2006 Georges Dubœuf Beaujolais Nouveau. Once again we get the classic whiff of bananas on the nose with a little cherry behind it. Last year's edition was pretty tart, but this year shows a much smoother profile, with characteristic light tannins and a short finish.

Random thoughts: when are they going to start shipping this with a screwcap? It comes with a short plastic cork, so it's not like they're standing on tradition. I think it would definitely help with the casual and spontaneous way in which this wine is consumed.
Posted by Benito at 5:12 PM

I agree completely about the screw caps. However, it is very costly up front as you must install a seperate bottling line solely for the screw closure. Rumor is Randall Graham spent $180,000 to convert Bonny Dune to screw cap. Great review and very accurate if I do say so myself. However, Morgon is my favorite Cru!!

Thanks for the input! For the rest of my readers, Big Mike is a wine professional, great chef, and close friend of the family who has taught me loads about wine and introduced me to some great bottles.