A few weeks ago, I ordered a used copy of Anthony Bourdain's Les Halles Cookbook: Strategies, Recipes, and Techniques of Classic Bistro Cooking. I've read a couple of books by Bourdain, and I really admire the theory behind Les Halles: serve good food at a reasonable price and make it taste awesome. And the kicker is that he's often using low-cost ingredients, just cooked properly and with attention to bring out the proper flavors of the dish in question.

(Side note: this book is gorgeous. It's printed on really heavy stock--I checked it with a micrometer, and the paper is .18mm thick. For comparison, regular copy paper is .09mm thick.)

This is the first cookbook that I've ever read straight through. I mean, I didn't read it all in one setting, but I read it over the course of a few days from cover to cover. It's also the first cookbook I've ever read that cussed at me, insulted me, and threatened me if I didn't do things a certain way. But he backs it up by proclaiming that the majority of the cooking in his restaurants is done by Mexican immigrants with no formal restaurant training who started out as dishwashers. As any good football coach will tell you, it's good to focus on fundamentals.

I've decided to try and cook my way through this book. I won't hit all of them--there's just a few critical ingredients that aren't available or affordable around here, but everything in the book looks like it tastes great. 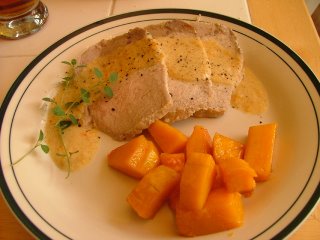 Here's my first attempt at one of the recipes... Rôti de porc au lait. Literally translated, roast pork in milk. That doesn't sound really appetizing, but it's quite good. You take 3 lbs of pork loin, sear it in a Dutch oven, add in a mirepoix of vegetables, pour in some whole milk, add a bouquet garni, and then cook the loin for an hour. Remove the pork, blend the sauce, and serve over slices of the pork, but only after the loin has rested for fifteen minutes.

I opted to add roasted chunks of butternut squash as a side item. For beverages, Paul brought over some of the Flying Dog "Doggie Style" Pale Ale from Colorado. An excellent, hoppy pale ale. Nice and bitter, a good counterpoint to the savory dish and slightly sweet squash. I also had some toasted sourdough bread on hand to help sop up the sauce.

My opinion: the pork was awesome, but the sauce needed a little more. Paul had seconds and thirds, but for my leftovers I'm going to ignore the sauce (already dumped down the drain), and use one of the half dozen mustards that grace my fridge. The pork loin was the most tender and delicious specimen that I've ever been able to get out of this particular cut, and really want to put a few cold slices on pumpernickel with hot mustard and a bit of sauerkraut and Swiss cheese. (Side note: I wrote this article a couple of days ago and just enjoyed such a sandwich, heated up in the old George Foreman grill. It was quite delicious. I think I might cook pork loin more often now!) 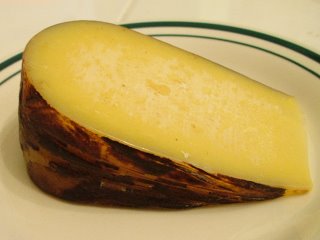 Afterwards, we had some Sonoma Dry Jack, a relative to the more well-known Monterey Jack and much closer to the original "Jack" recipe as opposed to the modern "white cheddar" incarnation. Think about a cheese that's somewhere between smoked Gouda and Romano. A thin, smoky rind, and a great firm cheese underneath. We ate it in slices, but I'm sure it would be good grated in certain dishes.

While I was serving the main course, I was explaining the whole cooking pork in milk thing, and said, "It's damned hard to get decent pig's milk in this city." I enjoyed the few seconds of terror on my diners' faces, and then explained that I used normal cow's milk. However... If you've ever wondered why you can't find pig's milk in the store, here's the reason.
Posted by Benito at 7:33 PM

First, I love Sonoma Dry Jack cheese, so-called Monterey Jack cheese can't begin to compare with it. Sonoma Dry Jack is good eaten straight or grated.
Second, what a great website that link on the question of pork milk leads to. I'll have to check it all the time. Hilarious!

Great write up and will try the cheese this weekend.

i tried making the same recipe for a christmas eve dinner last year, and i decided that, rather than throw out the vegetables cooked with the pork, i'd go ahead and puree them in with the sauce during the blending stage. i think this gave it a much richer flavor. maybe something to consider next time?

I just tried this recipe last night, with fantastic results. My wife swooned over the sauce. I didn't have an immersion blender, so I poured everything (minuse the pork) in my food processor, blended, then brought up to a boil in a clean saucepan. As previously stated, having the veggies/garlic is a good touch for the sauce.