On Tuesday, I attended a charity beer tasting for the Harwood Center, a local Memphis school for kids under three with special needs. A friend's son used to be a student, and when she said there was a beer tasting fundraiser... She had me at "beer".

More importantly, this tasting was being held at The Fresh Market, a chain of gourmet grocery stores. I've found some amazing stuff there, and was intrigued by the note of appetizers on the invite.

I was not disappointed. 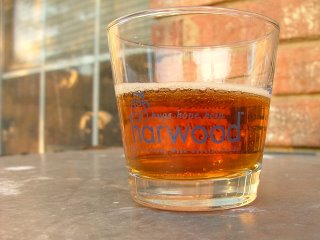 I even got a commemorative tasting glass, with a line drawn at the exact 3 ounce mark, which turns out to be rather perfect for a beer tasting. There were two or three appetizers and four or five beers per station. And the staff on hand were well educated on the particular beers that were being served. Over 30 beers were available, and I was glad to see American microbrew pioneers like Sierra Nevada and Anchor Steam represented in full. As is my usual practice with massive tastings, I chose to try those beers I'd never had before, plus a few that I really enjoy.

The entire store was closed off to the public for the evening, though they kept a couple of registers open if the guests wanted to buy anything.

Among the appetizers I sampled:And the beers (in no particular order): My only regret is that I didn't mention this earlier, so that more could attend. I mean, the place was packed, but it's for a good cause, and even when we left there were plenty of bottles yet to be opened. Rest assured, next year I'm going to be promoting this event for a full month beforehand.
Posted by Benito at 10:37 PM

Thanks for attending. It was a really good time and a great cause. They hold a special place in my heart. How could you not love a school that not only works with special needs kids, but also fundraises with beer???

Next year I'll give you more warning before the event. They really are a great school and it costs so much for a child to go there. They only charge the parents 10% of the actual cost of tuition and fundraise for the rest.