Last Sunday I attempted to prepare some demi-glace and thought that I could sleep a few hours on the final steps. That turned out to be a pretty bad mistake, as I got up at five AM with a mass of tar and carbon in the pot.

I tried it again this past Saturday, starting at around eleven in the morning. And at eleven at night, I poured the finished demi-glace into the bowl. All of my efforts yielded about a cup of demi-glace. 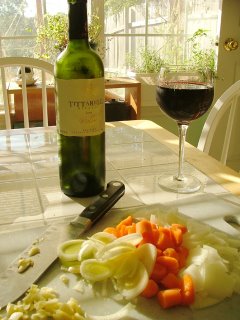 What went into it?I started by roasting the veggies and the soup bones on metal trays in the oven, until nicely browned. (Tossed with a little flour and tomato paste during cooking.) Then all of that was dumped in the enameled cast iron Dutch oven on the stovetop. Added tomatoes and peppercorns, covered with water, put on the lid, and let simmer. I managed to keep the stock simmering just below boiling for the majority of the day, typically at around 205°F (96°C). Throughout the day I skimmed off detritus and fat, stirred the pot, and tried to keep anything from burning.

Finally around 9:00 at night, after a full nine hours of simmering, I strained the stock and kept it in a separate bowl. After scrubbing the Dutch oven, I reduced down a half bottle of red wine and a minced shallot. After about a 50% reduction, I introduced back the beef stock. Over the next two hours, there were three or four additional strainings, involving wire mesh and paper towels to remove any solids or flotsam.

At 11:00, too tired to watch it any longer, I poured the demi-glace into a bowl, covered it, and let it cool in the fridge while I cleaned up the kitchen. The end product tastes pretty good (and gelled nicely), but in the past when I've done this using high-quality organic beef stock from the store, the result was quite similar.

However... I've got a ten gallon stock pot that I never use, and if I ever come across a load of decent bones, I might spend a whole day making enough demi-glace to last me an entire year. 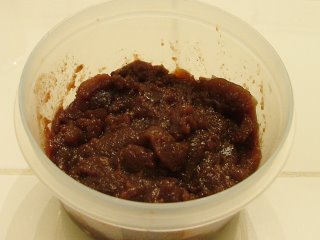 Final analysis: it's not too attractive here in the plastic container, just waiting for a liner of plastic wrap to lay over the sauce and send it on its way to the freezer. The final product, after cooling, was the consistency of jelly, hence the lumpy appearance in this photo. But once again, it smells and tastes incredible. Just taking a pea-sized portion and letting it melt on your tongue is like enjoying a good steak and a glass of wine.
Posted by Benito at 9:58 PM

Ben Thanks for using the Tittarelli always cook with wine worthy of drinking. And this one for the price is wonderful.