Too Hot for Wine 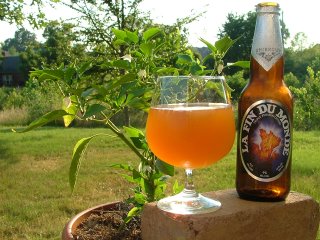 Despite a cool weekend, it's routinely been near 100°F (38°C) here in Memphis this month. As such, I haven't been drinking as much wine. No, this weather is more suited to cool cocktails like top shelf margaritas, traditional martinis, and refreshing mojitos using mint from the garden. And beer. Plenty of beer.

I'm working my way through a four pack of the La Fin du Monde from the great Unibroue Brewery in Quebec. Pictured is a glass of the fine brew I drank this evening after working in the yard. The glass and bottle are sitting on a brick beside my jalapeño pepper plant, which has been dormant most of the summer but recently produced a lot of new growth and a dozen white blossoms.

The beer is quite good, though as always with "big beers", you want to watch out for the 9% alcohol. Drinking one of these is like tossing back half a bottle of Riesling. It's got a tart, fruity flavor to it, though as you can see from the photo, it's cloudy enough that there's some definite structure to it, much like a hefeweizen. Because of the presence of this residual yeast, this is a beer that can improve over time. Indeed, the higher quality Unibroue beers are available in 750mL bottles (with cork stoppers and wire cages like sparkling wine), perfect to sit alongside your fine wines in the cellar.

One amusing side note: the name of this beer translates to "The End of the World". I've known about this beer for a long time, and always assumed that the name referred to Armageddon or something, given some of the darker themes around Unibroue's other beers. Instead, the label shows the Labrador peninsula of Canada, which the first settlers assumed was the geographical end of the world. Eh oui... 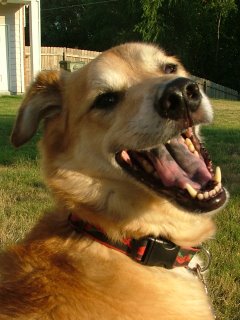 I've drunk this beer with some odd things, because I've had strange food cravings recently. Friday, I drank the beer with a tray of sushi, which was delicious. Yesterday, I had it with fish tacos from the local Mexican deli. Again, incredible. Today, work took me downtown, and I stopped at Cafe 61 and had a po' boy containing fried alligator, sautéed crawfish tails, and goat cheese. I wasn't able to drink the La Fin du Monde with it, but I did enjoy the Abita Fleur-de-Lis Restoration Ale, a fine bitter beer whose proceeds go to Hurricane Katrina-related charities. For the benefit of Yankees and other foreigners, here's the definition of a po' boy. Personally my favorite variety is one made with fried oysters.

Pictured at left is my faithful mutt Wolfgang, who sat beside me on the porch while I worked in the garden, took the photos, and drank the beer. (His black speckled tongue is likely due to a Chow or Akita back in his genetic woodpile.) As my grandfather said on such occasions, "Fellers, it don't get much better than this."
Posted by Benito at 5:16 PM