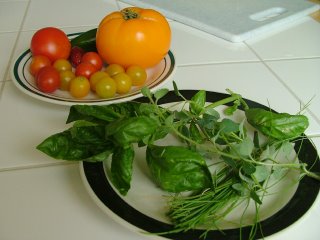 This Combinations challenge was right up my alley, because I've got plenty of fresh herbs growing in the kitchen. For this recipe I used basil, rosemary, chives, and oregano, as well as fresh cherry tomatoes and jalapeño peppers from the outside garden. And what did I choose to make?

Now, you may scoff as you remember this dish from its frozen dinner incarnation, or perhaps as a dried-out brick of grease from the school cafeteria. Fear not! While it definitely falls into the realm of comfort food, I'd like to think that the way I make a French bread pizza elevates the meal to delicious heights. I start out with half a loaf of good French bread from the bakery. You want to go softer rather than hard here, though if it's too soft you can crisp it up in the oven before adding the toppings. 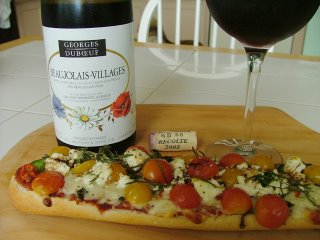 I dug out the half loaf a bit, and then added leftover spaghetti sauce, shredded mozzarella cheese, chopped basil and oregano and chives, thinly-sliced jalapeño peppers, halved cherry tomatoes (yellow and red), a healthy sprinkling of goat cheese, and a few sprigs of rosemary. I topped it with some kosher salt and freshly ground pepper, and tossed it in a hot oven until it just began to brown on top. Finally, I finished it off with a drizzle of balsamic vinegar.

This tastes great, though since I've often got all of the raw ingredients readily at hand, this has been a frequent midnight snack in the past month or so...

As for the wine, I initially wanted to go with a Viognier. When I think herbs, I think of that grape. However, with a really powerful tasting meal like this, I didn't want to confuse any herbal notes, and instead wanted a milder wine with some fruity elements to help bring out the tomato flavors. Thus I popped open a bottle of the 2005 Georges Dubœuf Beaujolais-Villages. I've heard good things about this vintage, and felt like giving it a whirl. The wine has some of the slight banana aroma you've come to expect from this producer, but it's got a good wild strawberry flavor to it, as well as surprisingly firm tannins for a Gamay. It went well with the pizza. The pizza had lots of earthy and herbal flavors, yet the wine provided a light and refreshing counterpoint. And serving it slightly chilled didn't hurt either.

I know a lot of people look down at a "pizza wine", associating it with cheap plonk drunk out of plastic cups by college students, but a good pizza with the right wine can be a lovely combination indeed.
Posted by Benito at 4:39 PM

I love pizza, and I like your idea of using french bread as the base. Will have to give it a try.