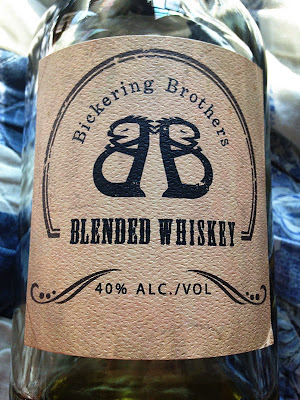 I recently had the pleasure of having an early dinner with Dave Rickert. I hadn't seen him in years and it was good to catch up over beer and sandwiches at a local bar. His brother Mike now lives in South Dakota, and from an earlier visit Dave brought me the last few ounces of a bottle of the most famous South Dakota whiskey.

Dakota Spirits Distillery has been in operation since 2006 but only in the past few years have they been able to sell their products in South Dakota (previously they trucked it across the border to Iowa). Their product line includes Ringneck Vodka, Coyote Light 100 Whiskey (a moonshine), Bickering Brothers Brandy, and this whiskey...

Half Bourbon, half grain spirits. Golden in color with a nose of oak and vanilla. Bracing like a young Scotch with a thin body but a long finish. On the palate I pick up a little spice and smoke. Definitely one that begs for a cigar on the back porch.

The whiskey is available mostly in South Dakota and due to state restrictions on how much they're allowed to produce, you're probably not going to see nationwide distribution anytime soon. But if you find yourself in the state to visit Mt. Rushmore or to ride at Sturgis, definitely check it out.
Posted by Unknown at 12:30 AM