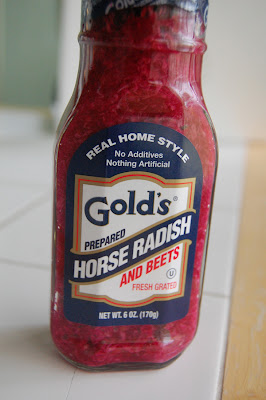 While strolling the aisles of the nearby international market, I spied a little bottle of prepared horseradish with grated beets. Forget the old peanut butter and chocolate ads, this is a combination of two of my favorite root vegetables in one convenient jar. I never knew that such a product existed, and had never even combined those two ingredients. All I knew was that I was hit with an intense craving, along with curiosity about how I would use it.

It turns out that Gold's is a Long Island family business that's been making kosher products for 80 years. Though Memphis is home to the largest Orthodox Jewish congregation in the United States, I don't live in that neighborhood and can miss out on some of the niche and delicious products available. After purchasing this jar I posted it on Facebook, where good buddy and fellow wineblogger The Wine Commonsewer shared it with his wife, a lover of beets and horseradish. Quickly, a friend of his gave a blessing to my desire to pair it with pastrami and also suggested that it was good with gefilte fish (which I adore). I had to wait a couple of days before finding some decent beef pastrami. Why in the hell does this city just have a bunch of turkey pastrami? Oy gevalt... 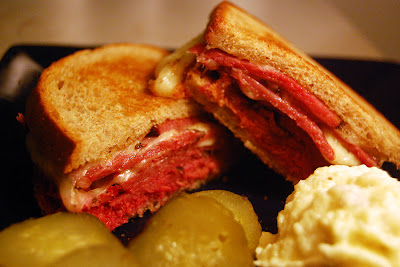 My sandwich isn't kosher, but I love some lacy Swiss cheese with my thick sliced, extra peppery pastrami. I toasted some seedless rye bread and slathered the bottom with a layer of brown mustard and then a thick layer of the Gold's Prepared Horseradish and Red Beets. I worried that the balance might be off, but I was craving both so much after a long and rough day at work that I threw caution to the wind.

And folks, this was amazing. I toasted the bread, heated the pastrami in a skillet and melted the cheese over it at the end, and threw some hot pickles and potato salad on the plate. I made and ate this sandwich about an hour ago, and I'm already tempted to go back downstairs and make a second. The sweetness of the beets really mellows out the heat of the horseradish, though the earthiness of both combine with the cured meat and savory bread to make for a dark and delicious meal. Serve with the darkest beer you've got and drool as it warms in the skillet.
Posted by Benito at 12:30 AM

I think you'd enjoy this relish. It has an old world earthiness that marries well with the proper ingredients.