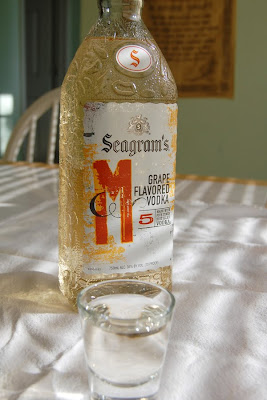 Seagram's Moscato (35% abv.) is a new spirit on the market--so new that there's barely anything about it available online. When you first open the bottle there's that unmistakeable musk and honey aroma of the Muscat grape family. And in fact the nose is quite fresh and lively. It was suggested that I try the spirit cold and with some water added. Unmodified at room temperature, it's a little harsh. I can't say that this is something that I would drink on its own, but it has elements that I like. That's what cocktails are for!

A lot of people credit The Moscow Mule cocktail with popularizing vodka in the United States. In the years after WWII but before the Red Scare, people learned to love the combination of vodka and ginger beer and lime. Later America embraced simple vodka cocktails like the Screwdriver, Bloody Mary, and the vodka martinis of the James Bond films, as well as more elaborate concoctions like the Harvey Wallbanger. Without further ado, I present: 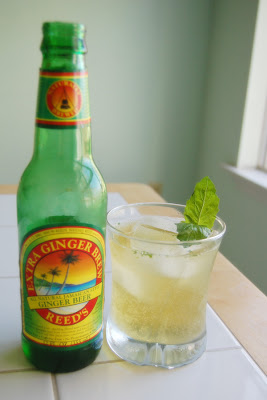 Keep your Seagram's Moscato in the freezer--it tastes best ice cold, and also helps keep your cocktails cool. Combine the basil and Seagram's Moscato in a shaker. Use a muddler to smash up the basil. (If you don't have one, chop the basil before adding to the shaker.) Add ice, and shake thoroughly. Fill a tumbler with ice and strain the vodka/basil over the ice. Then cover with ginger beer, and stir briefly before serving. Garnish with more basil if desired.

I really surprised myself with this one on the first try. The basil and ginger and touch of additional sweetness are precisely what the vodka needs, while the grape flavor gets a better chance to shine. And most importantly, befitting the mule name, the heavy dose of ginger gives it a spicy kick in the aftertaste. (I've been gently kicked by horses, burros, donkeys, and both Shetland and Welsh ponies. But oddly, never by a mule. I still wouldn't recommend the experience to anyone regardless of the species.) I highly recommend this cocktail if you like a mint julep, or are interested in herb-based cocktails. Grape and basil go great together, and the vodka and fizz and ginger just make the whole experience a lot more fun.


*I'm not going to get into the ginger beer vs. ginger ale debate in this space, but for this cocktail I used Reed's Extra Ginger Brew, a traditional Jamaican-style ginger beer sweetened with honey, fructose, and pineapple. Strong ginger flavor, lots of character. But feel free to use regular old ginger ale if that's all that you've got on hand.

Note: This was received as a sample.
Posted by Benito at 12:08 AM

V. interesting. I have a bottle, so I'll have to experiment. & on a side-note, I don't understand why bars don't keep gin and vodka in the freezer and vermouth and other such mixers in the fridge. Stirring or shaking a cocktail with ice doesn't make it cold enough. I mean, that's the whole essence of the thing.

AMEN Fredric great question to the bar owners!! Can't wait to try my own mule Ben.

I like how gin or vodka gets slightly thick and viscous when it's really cold.

Let me know what you think if you try it--I served it to a couple of other people with good results.

A necessary component of a good cocktail is its proper dilution. Keeping the base spirit chilled prevents the ice in the shaker from melting & therefore diluting the cocktail in the right way. A good cocktail is a balanced cocktail.

Of course, all bets are off when it comes to Memphis in the summer, where the ice is going to melt pretty quickly in the glass. :)

Hell, it's already too hot for me. I can't believe I've been able to endure 11 summers here!

Thank you so much for providing this great information. That was just what I was looking for, keep the great info coming.