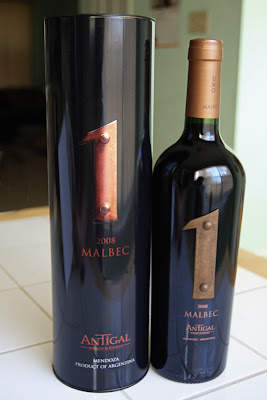 I've spoken about Malbec many times, and while there's more of it than ever before (and fears among some for an Australia-style backlash), a $10 bottle from Argentina remains a great bargain for the pizza and burger fare. It's easy to forget sometimes that there are better bottles out there, though still pretty easy on the wallet.

This wine has initial aromas of chocolate and blackberry, a touch of leather, and a little spice as it warms up. The chocolate and blackberry flavors follow the nose, and this medium bodied wine finishes very smooth with mellow tannins. It is still substantial enough to pair well with all sorts of grilled meat, and it's a good opportunity to serve a little steak and lamb, maybe with some cured pork products on the side. I found that it went particularly well with maple-cured bacon. 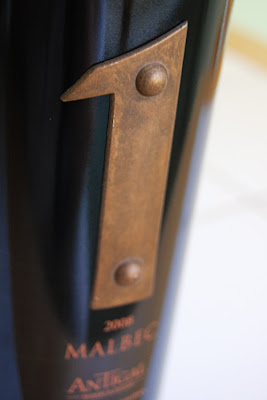 The bottle is distinctive and stands out on the shelf. When it's full, the bottle is almost solid black with orange text painted directly on the bottle. In place of a label or printed logo is a metal number one glued to the glass. (I haven't seen dozens of this bottle, but I've never seen the metal badge applied at a skewed angle.) You can pry it off pretty easily. It's not copper or bronze, that's a distress ink that's applied to what looks like aluminum. Regardless, I like the industrial appearance of the metal having been riveted to the bottle.

As you can see in the top photo, this wine is also available in a gift container. It looks good, but when I was pulling it out of the box I thought someone had sent me a bottle of Scotch. It's a nice looking bottle, and I think it stands on its own much better.


Note: These wines were received as samples.
Posted by Benito at 12:55 AM

I would like to share the tasting notes and the wine-food combination of a Malbec coming from Cachi - Salta - Argentina.

GUSTATIVE ANALYSIS: it is perceivable a very good mineral taste together with an agreeable astringent note; the final is grass flavoured and just a little bit bitterish. There is a consistent body and a well balanced structure. The gustative aromatic persistence is about 5 seconds.

MY PERSONAL OPINION: it is worth reaching Cachi and tasting this wine with the Durands.