Benito vs. the Eunuch: Capon

Quick Thanksgiving Recap: I assisted Paul with his big Thanksgiving, which swelled to nearly 20 people. To help feed the masses while leaving the kitchen free for casseroles and the turkey, I set up the Weber grill with lump mesquite coals on either side and an aluminum trough in the middle, which allowed me to roast a pork loin with indirect heat for a few hours. Halfway through I added a boneless leg of lamb and had both ready for carving right after the blessing was said. Both were a big hit with the various families assembled, and the smoky flavor wasn't strong enough to overpower the savory casseroles provided by the many guests and tender roast turkey Paul got from Fresh Market. For wines we had a Domaine Ste. Michelle Blanc de Noirs and a lot of the leftover Carmenere from the previous weekend. Several of the menfolk retired to the deck with cigars and Port afterward.

Skip ahead to Sunday... 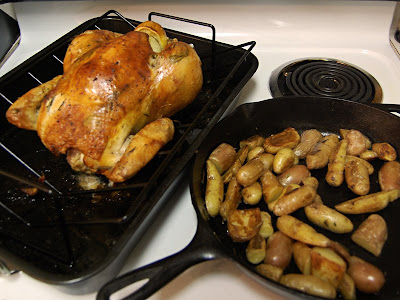 Every year after Thanksgiving, I roast a small turkey at home and make some side dishes so I can have leftovers (the lack thereof is the only downside of attending a big holiday gathering), but something different caught my eye. A capon is a male chicken who was castrated at an early age and raised as a plump, non-aggressive, and ultimately tasty bird. I first heard about this oddity sometime in high school--it was either a footnote in a history book or a Scrabble word, I don't recall. The Elizabethan delicacy was mentioned in Shakespeare a few times*, and I remember thinking that you'd have to be pretty decadent to even think up such a dish, like Roman emperors eating pickled hummingbird tongues. Of course, now I've got four different salts and five vinegars in my kitchen. You've come a long way, baby.

After picking it up from the Schnuck's freezer section (about $15), it took a few days for Farinelli to thaw out, and I prepared him for roasting the same way you'd season a hen. (And for the gigglers in the back row, no, the testicles are not included in the giblet bag. Though I did consider serving two de-breaded McNuggets on the side to frighten my fellow diners.) Just a little salt, pepper, some lemon and onion in the cavity, fresh rosemary under the skin, and fairly high heat.

A capon tastes somewhere between a chicken and turkey but is a lot juicier due to the added fat. I think it's a great compromise between the two, especially since a small turkey has a lot of heavy bones versus the available meat. I served it simply with fresh cranberry sauce and fingerling potatoes roasted in brown butter. 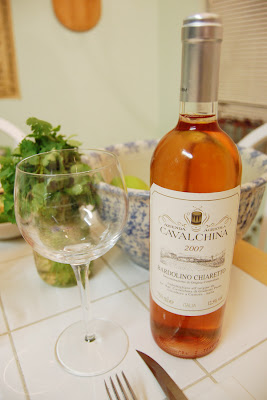 For the wine I followed my own Thanksgiving advice with an Italian rosé. The 2007 Cavalchina Bardolino Chiaretto from Verona in North Central Italy. $20, 12.5% abv. 55% Corvina, 35% Rondinella, 10% Molinara. It's light and restrained, with just a slight nose of wild strawberries. As it warms up more structure and lemon-tinged acidity is present, so resist the temptation to overchill this bottle. It is a delicate wine that melts on your tongue and would go well with quail or game hen. And while it has the least to do with the flavor, I love this particular shade of rosé: an orange/salmon that you see more often from Spain.

With a successful Thanksgiving behind me and a refrigerator full of leftovers, I'm a happy lad. Sandwiches and enchiladas and other tasty dishes await...


*And by "a few" I mean eight times in six different plays, twice as an insult:
Posted by Benito at 12:12 AM

I'm so glad you are still drinking rose wine. I just love it & its always such a perfect pairing with the bounty of Thanksgiving.

wonderful post. sounds as if you had a great thanksgiving weekend. and thanks for the brief assay into the bard's use of capon in his plays.

I used to steer away from rosé once it got cold, but it makes a nice counterpoint to the heartier reds begged for by colder weather.

I resisted the temptation to write the whole post in iambic pentameter. One of these days I'll go back and look for food and wine references in Shakespeare. A quick search revealed that wine was mostly a prop--a character demands a glass, or someone is carrying a jug, etc. One little curiosity from Twelfth Night, spoken by Sir Toby Belch:

"Thou'rt a scholar; let us therefore eat and drink.
Marian, I say! a stoup of wine!"

I thought Rachel Ray just made up that ear-grating term for a cross between a stew and a soup, but it turns out to be a Scottish word for bucket. And if we take the proposition that some other recipes are named after the pot in which they're cooked (tagines, paellas), then it could be a proper use of the word. Damnit.

One of these days I'll go back and look for food and wine references in Shakespeare.

The only one that matters is this one:

HAVE WE NO WINE HERE?

Good one, TWC! I've always been fond of this exchange in Macbeth:

Porter:
Marry, sir, nose-painting, sleep, and
urine. Lechery, sir, it provokes, and unprovokes;
it provokes the desire, but it takes
away the performance: therefore, much drink
may be said to be an equivocator with lechery:
it makes him, and it mars him; it sets
him on, and it takes him off; it persuades him,
and disheartens him; makes him stand to, and
not stand to; in conclusion, equivocates him
in a sleep, and, giving him the lie, leaves him.

Benito,
I would guess that people are very happy when they get a dinner invitation from. But, I guess the next best thing is reading your blogg! This is the first time I've read it and now your in my favorites list.

Glad you like it, and welcome aboard. Yes, my friends do appreciate invitations to dinner, but sometimes ask first--"Are you cooking anything weird like kidneys or brains tonight?"