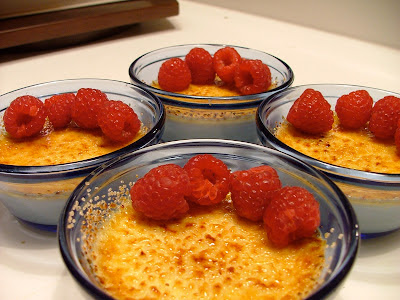 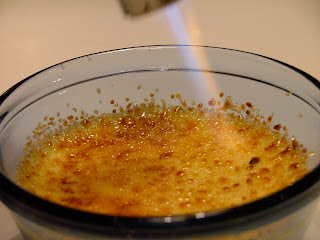 For dessert, Grace made a batch of her famous crème brûlée. At right you can see Paul using the butane torch to caramelize the turbinado sugar. Nice crunchy caramel crust to break through before hitting the eggy custard below. It was served with raspberries on top and some good Dominican 65% chocolate on the side. 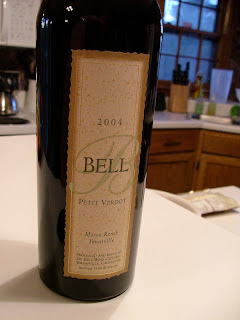 The wine saved for the dessert was a real treat. John over at Wolfchase took me into the back office and showed me a bottle of the 2004 Bell Petite Verdot. It's not listed on the website, and not easily available. My bottle that I picked up ($36) was #575 out of 1199, so there's not a lot of it out there. You don't often see a pure Petite Verdot (even if this had two or three percent cab sav), and I was excited to try it with some friends. It had dark violet and blackberry aromas, though the flavor was much lighter than expected. Blackberry and plum flavors with a hint of coffee and an inky color. John suggested that it was dark enough to write notes with, though the lavender stain on my tasting sheet shows that it's not that concentrated.

This demonstrates that not only is it good to make friends with your local wine merchant, but it never hurts to ask if there's anything interesting lurking in the back.
Posted by Benito at 1:09 AM

I treated myself to a butane torch then went away for two months and still haven't used it yet. Belated birthday greetings. I hope you had fun. I thought Lucy was in the Cleveland Museum. She was when we were there in 1987.