I wanted to do a followup to my previous post on the 2012 Scotto Celllars 50 Harvests Meritage based on a surprise that showed up today.

I love being a wine writer and there are a lot of perks to the job, both here and in the world of freelancing. There are times when it is stressful and I generally keep those concerns private with fellow writers, because it sounds like whining to the rest of the world. "I had to taste thirty Sauvignon Blancs today... I can barely feel my tongue." If you take this gig seriously, trying thirty wines in a row can be exhausting from a sensory and mental standpoint. Take whatever you like: football, for instance, and instead of just watching your favorite team once on the weekend, you instead have to watch just the first five minutes of thirty different games, take notes on said five minutes, provide analysis... it can be tiring, but at the end of the day there are worse ways to pay the rent. 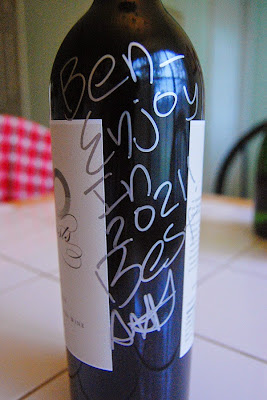 My one bittersweet complaint that I have mentioned here from time to time is that at a certain point, you start trying a bunch of wines that are great now but are really going to shine in a few years or a decade. And you can't really wait that long because the publicity cycle is at release or tied to a certain holiday. Who knows what may happen--a winery could go out of business, the small exotic wine region could be disrupted by economic or military concerns, anything. So you write about it now and give your best guess for when you think it will be in the Goldilocks Zone based on prior experience with similar styles that have been aged.

After I said, "And oh, to be able to taste this in 6-8 years when it will really shine...", Anthony Scotto was kind enough to send me a second bottle to try in 2021 with instructions written on the bottle in silver ink. This is not a quid pro quo: I'm not promising a good review in seven years per my sample policy. And there is journalistic precedent for this, in terms of privately requesting a second bottle if the sample you received is corked or damaged in shipping. Nothing was wrong with the first bottle (quite the opposite), but I appreciate the opportunity to try this one with proper aging. I have no idea what the wine writing world will look like then, but I am committed to keeping this one stored properly so that I can evaluate it at that time.

I've been given older vintages in the past, and of course have had the chance to try some spectacularly aged wines at private tastings, but this is the first time that I've been provided with a sample with the intent of getting back to them in seven years. I'm looking forward to the experiment!