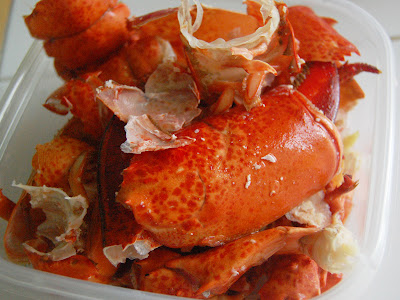 For my birthday dinner, I found myself craving shrimp and grits. But I wanted to elevate the dish a bit, and I noticed that the local grocery store had a bunch of frozen cooked lobsters. These are usually the slow, old ones that are about to die and are sold off at a bargain price. I prefer steaming live lobsters, but for certain applications the sleepers are perfect and economical. I pulled out the meat, saved the shells, deveined the tails, and munched on a little roe from the female of the pair. All shells were rinsed while diced onion, carrot, and celery were slowly browning in the stock pot. 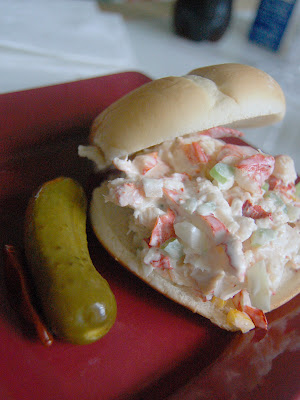 What to do with all that lobster meat? I chopped it up with onion, celery, yellow onion, and mayo to make a traditional New England lobster roll appetizer. A little lemon juice and paprika added a necessary kick.

Julia was a huge fan of the lobster roll, and I served it with little gherkins of both the mild and hot variety, except that the hot "Zingers" from Kroger were milder than a limp green bell pepper from Subway. Strongly disappointed in the hot pickles, but the lobster salad on a soft butter roll was the perfect combination of creamy, salty, crunchy, and spicy.

Meanwhile the lobster stock simmered away, filling the entire house with the smell of lobster. A deep brown broth was rolling along just below the boiling point... 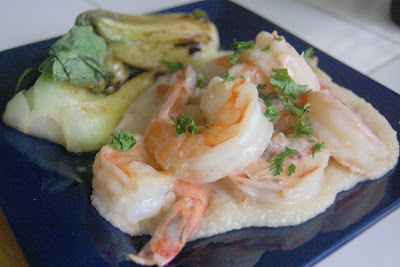 The lobster stock was strained twice and combined with grits until the proper consistency was acquired. Meanwhile, I browned pork sausage with onion, celery, and garlic and butter, combined with some flour to make a roux. I deglazed with white vermouth and then added a pound of grey tiger shrimp.

At the same time, I was braising some baby bok choy with Chinkiang vinegar and adding duranguense cheese to the grits. Smacked everything around in the various pots and skillets and served it hot and steaming with a quick sprinkle of curly parsley. 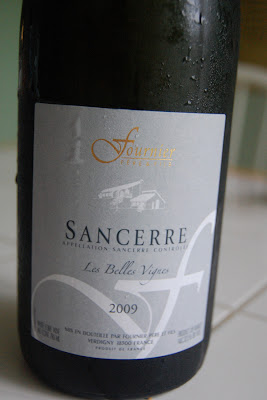 The flavor was incredible, and because it's my birthday I'll pat myself on the back. The concentrated flavor the lobster stock and rich cheese really elevated the grits, while the pan sauce made the shrimp sing. Julia found the bok choy a little bitter, but I enjoyed the contrast against the sweet and savory elements on the plate.

I added some dried Aleppo pepper and a few splashes of Trappey's Peppers in Vinegar. While delicious, I wanted a little more zing and heat in the dish, and there's nothing wrong with adjusting seasoning at the table.

Thanks to Michael Hughes of Joe's Wines & Liquors for picking out this wine for me. I was craving Sancerre to go along with this dish but couldn't find any in the greater Cordova area. 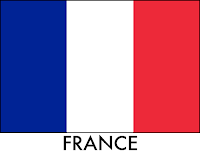 Pleasant aromas of lemon zest and minerals, with a bright and refined body. Acidity is balanced by a deeper and more complex structure. The minerals linger on the finish. Highly recommended, and a perfect pairing with the low country cooking.
Posted by Benito at 12:30 AM

Missed yer B'day while I was on the road in Monterey. Apologies and a late wish of happy returns. Your shrimp with lobster grits looks and sounds wonderful; it would go in a restaurant for $26.

Thanks, and you're right about the price. All the great peasant food eventually becomes expensive, like osso buco.

Hooray Sancerre! Looks as if it was a glorious birthday my friend, can't think of anyone that deserves it more!

It was a good birthday, and Michael did a great job picking out the wine.