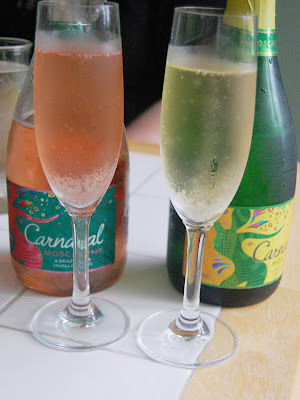 Wine has been made in Brazil since the 1530s, but not a lot of it has made its way up here to the States. I'd certainly never had one until I got a sample offer a few weeks ago. Cooperativa Vinícola Aurora is Brazil's biggest wine producer, a co-op of 1100 families though not a dominant and controlling force like South Africa's KWV used to be. They produce a wide range of wines using both classic European grapes as well as Vitis labrusca hybrids.

Aurora has many labels, and Carnaval is relatively new. There's not a lot of information on the website but the company is promoting the bubbly through Twitter, Facebook, and the promotional group Wines of Brasil.

The grapes for these wines (and most Brazilian wines) were grown in the southernmost state of Rio Grande do Sul, which is still a good bit north of the Chilean valleys and the Argentine Mendoza region. The area was the site of lots of German and Italian immigration during the 19th century which had a major impact on the type of wine produced. 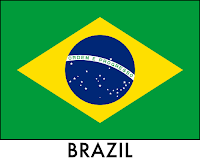 I'm combining these two reviews because they were so similar to each other. Both have a foxy, musky aroma that reminds me a lot of some hybrids but is also present in your fuller-bodied Muscat family grapes. Lots of honey and floral elements with just a tiny bit of citrus peel. The red had a little strawberry edge to it. While designed to be served chilled, I found the wine more relaxed and well-balanced at room temperature. Both wines are fairly sweet, and with the low alcohol content and high fizz they would be fun for parties. I'd like a little more acidity but they were close in spirit to the northern Italian moscatos.

Between the two I was expecting to prefer the rosé, but found the white to be a little better. More even, a little crisper, and a more refreshing beverage. Lots of fun with appetizers and as the intro to a mixed grill dinner with smoked chicken, grilled steak, and grilled summer squash.

Note: These wines were received as samples.
Posted by Benito at 12:31 AM

This is the very first red sparkling espumante that I have ever seen so far in Brazil. I must try it sometime. It intrigues me. Cheers, Anthony ( TONY ) Quinn

I'm not sure of the exact grapes used, but for the sake of curiosity it's worth a try.

Where can I buy this wine?