We call it saké, but over in the Land of the Rising Sun the legendary rice beer is known as 日本酒 or Nihonshu, which translates to... "Japanese alcohol". I'm going to admit that I haven't been a fan of the beverage in the past, even publicly stating so in a previous post. But maybe I've just never given it a proper try, and maybe the low-rent faux Japanese restaurants where I've tried it in the past weren't serving good representative samples.

Just for the sake of simplicity I'm going to refer to it as saké for this post. Particularly because these bottles were brewed in...

THE BEAVER STATE! Yes, all of these are made by SakéOne in Forest Grove, Oregon, just west of Portland near the coast. Which also makes me wonder... I live next to the biggest rice producing region in the United States (eastern Arkansas), yet I don't think anybody is making saké there. Another day, another project... Anyway, looks like SakéOne is part of that Pacific Northwest ethos of small artisan production of wine, beer, and cheese. The company has been producing traditional and modern styles of saké for 14 years, and a lot of the marketing that came with this set involved the use of saké as a cocktail ingredient. Let's try them all straight, and then we'll talk food and more... 乾杯 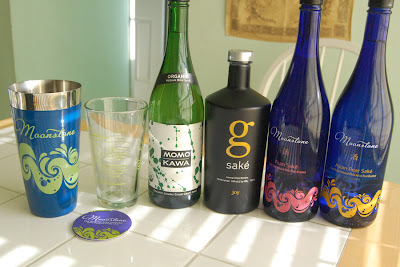 Moonstone Plum Saké
$10, 7% abv.
Sweet and simple with a pronounced plum flavor and a pinkish-purple hue. It's a little too sweet for my tastes, but far smoother and more restrained than other plum sakés I've had in the past.

Moonstone Asian Pear Saké
$12, 12% abv.
I was excited to try this one since I love Asian pears, but there's not a lot of the flavor there. I'm all about lighter fruit notes, but this one is just a little too subtle. Very pleasant with a grilled chicken salad, though, and refreshing on a warm spring day.

Momokawa Organic Junmai Ginjo Saké
$13, 14.8% abv.
Bright and lightly fruity, dry with a touch of yellow apple aroma. Crisp and clean with just a hint of rice flavor, and an extremely short finish. Sipping this revealed something interesting about saké: unlike wine, there's almost no aftertaste, and your palate is ready for just about anything next. Unlike beer, it's not filling, and it's nothing like spirits. Really a unique experience.

G Saké Junmai Ginjo Genshu
$20, 18% abv.
This one is stronger, nearly gin-like with the barest hint of acidity. A little herbal and savory, and it reminds me of an extremely refined and mild martini with no kick from the higher alcohol. While I enjoyed it with food (more on that below), it really stands on its own quite well and would make a nice apéritif. Highly recommended, and very affordable for the chance to try an amazing bottle.

I think you'd really have to enjoy it (or any of these other sakés) on their own without competing alcoholic beverages, just because they are so light and delicate. And thus I discover the problem in the past has been that I was tasting saké between cocktails and wine or other drinks. 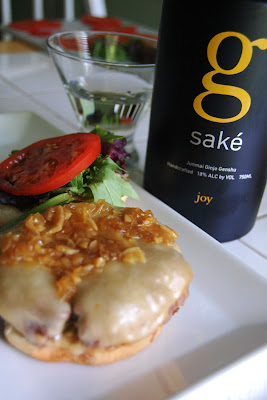 Before I ever opened the bottles, I was worried about pairing. What goes well with saké? I've never really done any Japanese cooking... But a bit of research revealed that to be a stupid question, because it's like asking what goes well with wine. Depends on the bottle and depends on your mood. One bit of advice I got was that savory flavors and vinegar tend to go particularly well, so on Friday night I grabbed some sashimi and pork gyoza from the deli. I mixed soy sauce and rice wine vinegar, and started with the dumplings, the Momokawa, and the G.

And that's the moment when saké finally clicked for me. It all made sense, and it was delicious. The sashimi was terrible--not as a pairing but as something I might reject at a bait shop. I focused on the dumplings and had a wonderful time. For the rest of the weekend, I decided to sip a bit of saké with different meals to see what worked. I hit upon a great combination Saturday: a burger soaked with a little soy sauce and dusted with Chinese five spice powder, topped with smoked Gouda and a little reduction of shallots, garlic, white wine vinegar, Sauvignon Blanc, and olive oil. I let it cook down, caramelize, and get nicely tender. This was a perfect pairing with the G Saké.

The samples came with an extensive list of eclectic cocktail recipes, and the Boston shaker is imprinted with several of them, e.g. the delightfully named Spicy Mothra (pear saké and ginger vodka). I didn't get around to any of them during this weekend, but might try a few in the next couple of days when I've got access to rose petals and lemongrass and Buddha's Hand citrus.

I don't know if I'll be incorporating saké into the standard rotation, but I have reversed my earlier opinion on the subject and look forward to exploring it further in the future.


Note: These bottles were received as samples.
Posted by Benito at 12:53 AM