Betty's Spaghetti with the Freakshow

I've eaten many odd things in my lifetime, but despite the two commonplace primary ingredients, I'd never even heard of "spaghetti and cottage cheese" until recently. I have no animosity toward the concept, and I love both parts of the simple recipe. But it's not something I'd ever contemplated, and I decided to research the dish. I discovered that there was a bit more depth... 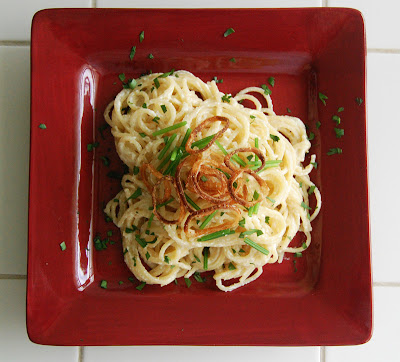 The great Thomas Keller of The French Laundry (and consultant to the best food movie ever, Ratatouille) has said that his earliest flavor memory is his mom's spaghetti with cottage cheese and caramelized onions. He updated the recipe with ricotta and a few other flourishes, with the full recipe published in Saveur magazine.

At right is my attempt at "Betty's Spaghetti". I followed the recipe strictly (something I almost never do) and not only was it amazing, but there were little touches that made the whole experience so much better. Fried shallot rings are a classic Keller touch, and stupidly easy to make. I like to throw them on salads or on top of soup every now and then. The blanched parsley stalks give a nice little lemon/green/bright note to the otherwise buttery/salty/savory pasta. OK, so I didn't have any cilantro shoots around but minced some of the flat leaf parsley for garnish and additional flavor.

This is really, really good, and while you'll see visible grains of milk curd on the noodles, it all tastes wonderful, like the way they would serve macaroni and cheese in heaven. While reading about the recipe, I wanted to pair it with a substantial white, but was intrigued by the red suggestion. It turns out that the caramelized shallots are the primary flavor driver of the dish and a decent red is necessary. Here's what I served:

There's a splash of Petit Sirah in this wine, which is always a good thing in my book. Black currant and blackberry, with notes of cedar, spice, and black pepper. Mild tannins with a prominent dark fruit character. Mellow but long finish, and really right at the perfect age to drink. Like a lot of the Michael David wines, this is fun and has quirky branding, but most importantly is affordable and food-friendly. This is a great weekend BBQ wine if you have the sort of gatherings where people are melting Roquefort onto lamb burgers and there's a kettle of choucroute garnie simmering away. And that's not snobbish or ostentatious--lots of my fellow backyard grillers are upping their game these days. 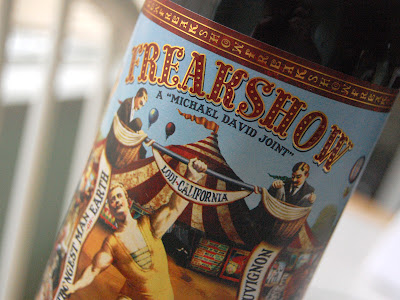 In the third part of this post, I will focus on the label, which covers a subject near and dear to my heart: sideshow performers. Personally I don't use the term "freak", but it is the historical classification for the late 19th century, first half of the 20th century art centered around people with noticeable physical disabilities who were involved in the circus industry. A good book on the subject is Frederick Dimmer's Very Special People, giving the human stories behind people viewed as monsters. Though the sideshow has been replaced by voluntary oddities (people who pierce themselves or otherwise do painful/awkward things), there was something fascinating about that era. People who otherwise would have been locked away in an attic or shunned in small towns got to perform before European royalty, travel all over the United States, and in the off hours, laugh at the real freaks who'd pony up a few bits to stare at them.

(While I'm sharing odd circus trivia, it's worth noting that a lot of the classic sideshow performers retired to the carny winter home Gibsonton, Florida, Don't believe me? Here's a ten minute video segment on the town.) 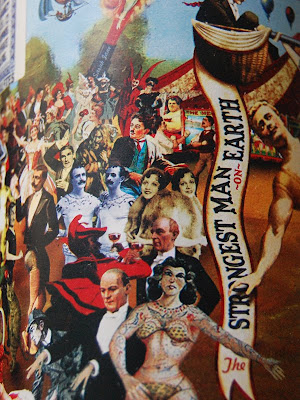 Lots of real sideshow performers are featured on the full wraparound label. I see dear old Фёдор Евтищев, also known as Jo-Jo the Dog-Faced Boy. On the back you've got the 8'3" Canadian giant Edouard Beaupré, the conjoined twins Daisy & Violet Hilton (who appeared in Tod Browning's 1932 Freaks), plus so many others from photographs and illustrated posters and postcards and other ephemera associated with the era.

Why the fascination with the subject? It's not exploitative. I don't stop and gawk at people who are somewhat outside of the norm. I'm very happy that medical science has progressed to the point that many of these painful conditions can be prevented or treated, and that society as a whole is much more accepting of the differently abled. There were bad things that happened during the whole sideshow era, yet from an anthropological standpoint it is so interesting to read the stories and hear the oral histories of these performers who were able to find a very particular job when no one else would hire them, and to read about the relationships that they formed between one another.

Note: This wine was received as a sample.
Posted by Benito at 11:34 AM

Wow, I would have never thought to pair this dish with a cab sauvignon. Amazing and I can't wait to try it.

On the subject of freaks, have you read any of Harry Crews' books? He hails from Gainesville, FL (or at least that's where he teaches) and his stories bring a unique perspective and dignity to what folks might call "freaks".

Thanks for the recipe. I look forward to the culinary adventure and the chance to try a wine pairing that is truly outside my experience.

"Betty's Spaghetti with the Freakshow" ..... surely the name of a rock group.

I might try some of the leftovers with a white wine, but it's a strong enough dish to handle the red.

I'm not familiar with Harry Crews, but will keep an eye out for him.

For some reason I'm thinking about a 50s doo-wop band but the guys are all dressed like KISS.