I had the distinct pleasure of spending time this weekend with two fellow winebloggers here in my home state of Tennessee, in my home town of Memphis: Californian Samantha Dugan of Samantha Sans Dosage and Georgian Joe Herrig of Suburban Wino. Both were in town for different reasons, those reasons being red, white, and sparkling. Longtime friend Grace served as hostess for this epic meeting, Lady A brought dessert, and we spent a leisurely afternoon with good food, good wine, and lots of fun conversation.

I met Samantha through her comments on my blog years ago, and have kept in touch ever since. I've always admired her unique voice and thorough knowledge of French wines, and though we'll never agree on Pinotage I know I'll always get a hug when I see her.

This is actually my second time meeting Sam and her husband Carl in person--they came by last July and we had a blast. Can't wait for them to come back again.

I don't recall the first time I encountered Joe, but it was around the time that I was taking notice of the growing community of Atlanta winebloggers. I think I noticed one of his comments on another blog, followed the link, and began reading his site. A guy who enjoys barbecue and peppers his wine reviews with 80s pop culture references? How could I not read Suburban Wino.

The fun thing about meeting Joe in person is that he's exactly like he is on the blog. The conversation moved from e-mail to verbal seamlessly, and machinations are in place for a future Nashville gathering. Stay tuned!

Friday night we met in the Cooper-Young district for dinner at The Beauty Shop, one of my local favorites. The good thing about Cooper-Young is that if someone in your group changes his or her mind, there are a lot of other options nearby. But they trusted me, and we enjoyed an amazing dinner. Joe and Carl went for the seafood while Sam and I were chowing down on rare red meat. Hers was a cherry smoked ribeye and I had a pair of lamb chops in a berry sauce, accompanied by fingerling potatoes smashed with goat cheese. I also had a martini made with a gin from Little Rock, Arkansas, but that will have to wait for another post. 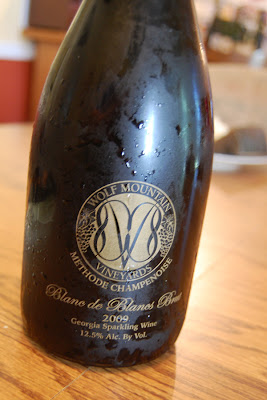 Saturday at noon we all gathered at Grace's house for wine and food. I was particularly excited to try this gem that Joe brought along:

2009 Wolf Mountain Blanc de Blancs Brut
Dahlonega, Georgia (about 75 miles NE of Atlanta)
$26, 12.5% abv.
Made in the traditional méthode champenoise from Chardonnay. This is the first Georgia wine I've ever had, and I fear any more in the future will be a disappointment. This is a well-made sparkler with hints of yeast and toast on the nose that give way to a crisp and dry flavor with just enough acidity to balance things out.

Fried chicken is such a great natural pairing with sparkling wine, and due to the regional associations it would be easy to suggest that. But I really found myself craving oysters when I tried this wine. Maybe with a tiny dash of cilantro-serrano-grapefruit salsa on top of each twitching bivalve. 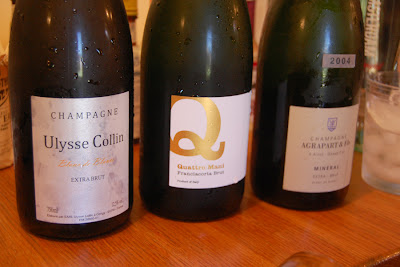 I don't have detailed notes on these wines. I was mostly just having fun and enjoying wine without overthinking it, which everyone needs to do from time to time. Many thanks to Joe and Sam for doing the heavy lifting on the wine here, and for hauling everything across multiple time zones. But here's a few links in case you want more information. 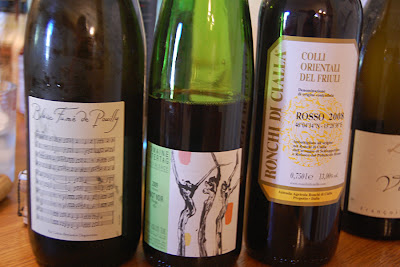 2008 Ronchi di Cialla Colli Orientali del Friuli Rosso
Got to add a new grape to my list with this one, made from Refosco and Schiopettino ("gunshot").

There was also a Vouvray, and I think I'm forgetting some others, plus my sole vinous contribution: a Pfeffingen Beerenauslese that was quite nice. More notes on that later...

This post has gone on way too long, so I'll conclude with some photos from lunch:

After some cheese and olives, I did a simple salad with spinach, strawberries, Gorgonzola, and a balsalmic vinaigrette. 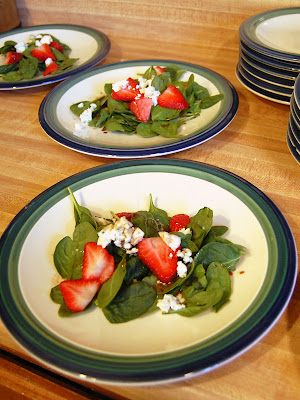 The night before, I made bœuf bourguignon using most of a bottle of Chilean Carménère. I used leeks and shallots instead of onion, and was happy with the results. 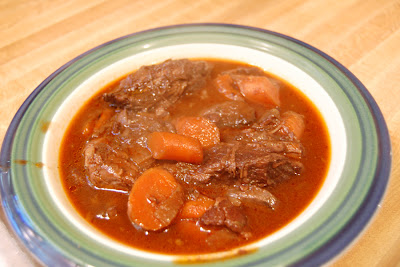 The tandoori-spiced pumpkin custard was not a big hit (I'll give full details in a future post), but Joe provided a pairing of Moon Pies and RC Cola for those that had never experienced that Southern treat. It was the first time I'd ever seen RC Cola served in delicate espresso cups. The real dessert was Lady A's gift of apple pie and gelato. 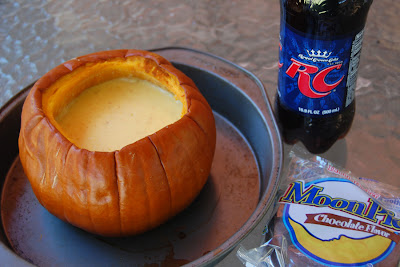 After cleaning up and a lot of goodbye hugs, this guy went home and slept for a few hours. A great time was had by all, and thanks to everyone who contributed and made it possible.
Posted by Benito at 12:33 AM

Neat! Where there is love, life is complete. (And with wine and good food, even better!)

It was a phenomenal weekend. Much love and fun all around. My arms are sore from the hugging.

Just spectacular. Hated to have to scoot out of there, when the setting called for lounging and laughing and eating and drinking all afternoon.

It was great to finally break bread in person. Let's get on that Nashville summit soon.

And, although sad to leave Memphis, the procurement of a "Bucksnort, Tennessee" magnet for my fridge assuaged my melancholy.

Next time you're in the area I'll give you directions to Frog Jump, TN, north of Memphis.

Can't wait to break out the spoiled grape juice with you again.

Wait, I was there? Have to say this trip to the south has put a hurtin' on my liver. Our lunch however, was brilliant. Could have spent hours and hours there with you guys, (and by guys I mean Grace...am in full on love with her now) in fact I should have considering I was good to NO ONE at that rehearsal dinner I dashed off to.

The food was delicious Ben and you were so sweet to do that for us. Hanging with Joe was just as you said, like reading his blog. Genuine cat that I'm so thrilled that we all made the time...I simply love you guys.

Truly a pleasure seeing you again, and hope it's not another year before we see each other.

After having just baked a pie pumpkin for a soup recipe, I looked at that pumpkin custard photo and said to myself..."how?" as when a pumpkin is cooked that well, it literally falls apart (great when trying to scrape meat from skin...not so great when trying to maintain the integrity of the shape of the pumpkin) when fork hits pumpkin. lol

So how was this recipe not a hit?

I'm going to do a pumpkin post this week or next, but in brief I roasted the empty pumpkin until it was tender but not falling apart, cooked the custard separately, combined them, and let it cool on the table.

Here's a recipe that involves cooking the custard inside the pumpkin from the Frugal Gourmet, and here's a South American stew I cooked in a pumpkin called carbonada criolla.

Have never concieved of tandoori-spiced pumpkin custard. Where does the tandoori fit in please?

Give me a couple of hours and I'll have a post devoted to the pumpkin.