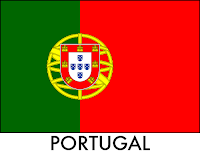 The first time I ever heard of Vinho Verde was a little indirect. I was typing up a very odd wine list for a restaurant. I don't mean odd in the sense of being eclectic and exotic, but rather that every grape name was horribly misspelled and there were Chardonnays in the red column. The owner had opted for a simple color categorization, so you had Red Wines, White Wines (confusingly containing dessert wines and sparklers that were not marked as such), Pink Wines, and finally a category of Green Wines, with a single entry: Vinho Verde. I shrugged it off as some misunderstanding, but looked it up when I got home. Despite the name's literal translation, Vinho Verde isn't green, and while it's usually served very young, it's not Beaujolais Nouveau young. 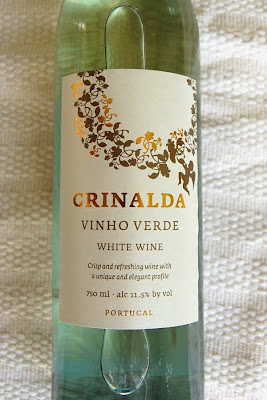 It's a good starter wine for people since it's a little sweet, low in alcohol, inexpensive, and pairs well with lots of different food. It's just barely fizzy, so you don't have to be careful opening it. Just enough to make it a little more fun. I've found it to be a big hit at family holiday gatherings for just those reasons. I'll usually say something like, "If you like lemonade, you'll love this." Takes the fear of wine out of the equation.

Crisp and tart, very light when it comes to bubbles. Dominant aroma of green apple, and medium sweet. I decided to pair it with some spicy shrimp tacos from Humdingers, the first time I'd tried Vinho Verde with something hot. It was a great match, and it's a wine that's not often thought of in those eternal discussions about what to pair with Mexican, Thai, or Indian food. 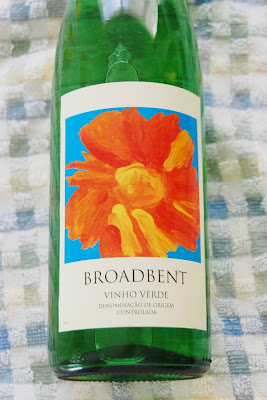 Apple and pear, crisp acidity, restrained sweetness. The mineral elements and balanced acid/sweetness gives this the profile of a nice little Riesling. This had the stronger bubbles of the two, and I found myself preferring it overall. It's probably the most serious tasting Vinho Verde I've had, while still remaining a fun, casual wine. I served it with Chinese takeout--nothing special or authentic, just random fried rice and steamed dumplings. Again, the crispness worked well with the greasy/savory food.

Note: This Broadbent wine comes in a very tall, thin bottle that looks lovely, but may not fit in some carrying bags or wine storage units. I'm not complaining, but it's more of a warning to watch out for the top of the bottle. Like telling a tall friend to be careful walking under the chandelier.


Note: These wines were received as samples.
Posted by Benito at 12:32 AM

Thank you for another great review on these fine little wines from Portugal, yes they are very refreshing. On a side note, what are your thoughts on "White Porto"?
I simply love a great white Porto.

Take care l'ami and I wish you a great holiday season, also,

Honestly, I've never had a white port. Not that I've avoided it--but rather I've never seen a bottle at a tasting or other event.

I will keep my eyes open in the future, though, as it sounds interesting.