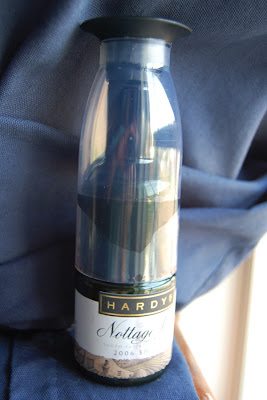 I've discussed alternative packaging here before, the various attempts to successfully market wine in something other than a 750mL glass bottle with a natural cork in it. Most of the efforts involve something more environmentally friendly: recyclable Tetra Paks, boxed wines, or even refillable stainless steel bottles. The other versions involve convenience, and have been around for some time: mini bottles, aluminum cans, etc. In the second category we have a type that's growing in popularity: the wine that comes with its own glass.

Recently Dr. Vino talked about the smashing success of Le Froglet in the UK, a wine that comes in a plastic stemmed glass with a foil lid. Coppola had something similar a while back. When I saw the "Hardy's Shuttle" sitting on the counter of a local wine shop, I couldn't stop laughing and had to grab one. 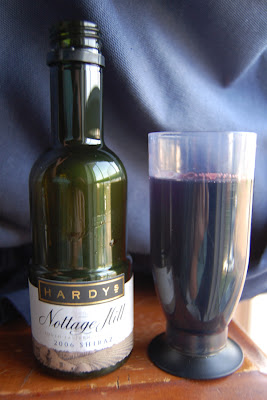 The 2006 Hardy's Nottage Hill Shiraz retails for $3 per 187mL bottle, 13.5% abv. While intact the entire bottle and cup combination is about 17cm/7in tall. The acrylic cup is actually the screwcap for the wine--I thought it would pop off separately, but once I broke the seal and moved it around for a photo I managed to spill some of the wine, hence the stain on the label and the thin layer of wine you can see in the top photo.

Tasting notes: Lots of cherry, big fruit aromas, and something I've never encountered before in a wine, that slightly spicy aroma of Double Bubble Bubble Gum. I don't know if it's something about the packaging or storage, but that odor is unmistakable. Flavorwise it is very tart, tannic, and rough. Definitely one of the odder wines I've tried, and that's saying a lot. It might be a bit different in an actual glass, but I wanted to try it as it was intended to be consumed.

As for the packaging, it's a funny little idea, but there's really not much of a benefit over drinking straight from the bottle. In fact, it could be made just a bit differently with a wide mouth screwcap like you get with lots of bottled juice these days. The acrylic cup is too small and narrow for any real appreciation of the wine, and it also doesn't hold an entire bottle--you need to pour about half in, drink that, then pour in the other half. I think that cuts down on the convenience factor a bit, since at an outdoor fair or concert you'd need to keep track of the small bottle and the small glass. And while I'll keep the glass just out of curiosity, its re-use value is limited due to the small amount of liquid it holds and the grooved threads at the bottom, making it harder to clean.
Posted by Benito at 12:16 AM

Aw, and I was going to save a bottle for the next time I see you. ;)