The Green Winemaking series returns next Monday--two more Sonoma wineries to go! But for a little change of pace, how about some "green" beer that has nothing to do with St. Patrick's Day...

I got an invitation recently from the good folks at Slow Food Memphis to attend a brewery tour and beer tasting at Ghost River Brewing in Downtown Memphis. Checked with my buddy Paul, and the words "free beer" had barely left my mouth before he agreed to come along. 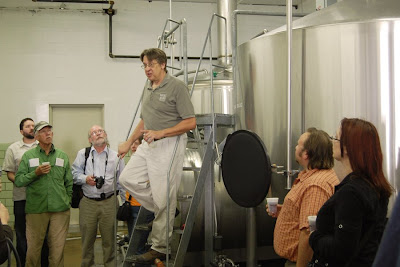 Pictured here is founder of the brewery and co-founder of local brewpub Bosco's, Chuck Skypeck. He led us on the tour, and about every fifteen minutes, made sure that a new tray of cold beer samples was distributed throughout the crowd. We all became big fans of Chuck.

He spoke a lot about the importance of water in brewing beer, and how local differences in minerals and hardness/softness of the water are responsible for the varied styles around the world, from the thick dark Irish stouts to the light and refreshing Czech pilsners. Other components are also key to making beer with real flavor (something this country ignored for a big chunk of the 20th century), principally malts and hops. The former is produced from sprouted barley, and the latter is a cousin of the marijuana plant that provides flavor, bitterness, preservative qualities, and a low-level soporific effect. So if you've ever gotten relaxed and tired after a couple of beers, now you know why. 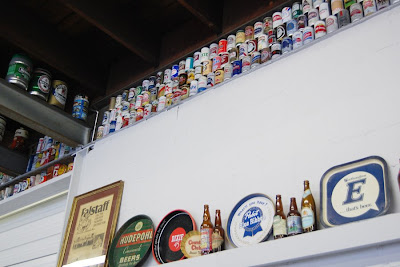 Brewery tours are a lot of fun because the schedule of production from start to finish is on the order of days and weeks, not months and years as with wine. Since beer production is not tied to the seasons or centered around a harvest, it's just as interesting to take a tour in the winter as in the summer. And good breweries tend to have interesting memorabilia and history in them, like this collection of old beer cans, trays, and steins from all over the country.

Since I've been writing about green winemaking a lot recently, it's important to note that a portion of all sales go to the Wolf River Conservancy in the interest of preserving the water quality that is so important to brewing quality beer here in the Mid-South. 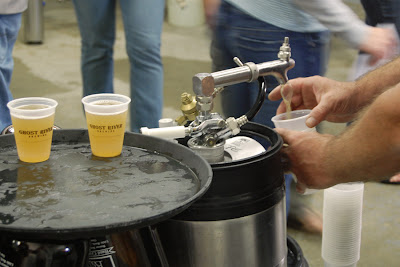 Here one of the brewery employees taps a keg of Hefeweizen, an unfiltered German style of beer.

Ghost River currently produces four varieties, and I sampled all of them:

Ghost River Golden was presented in its not-quite-finished state, but was still delicious. Just lightly bitter, moderate body, and probably the easiest to transition to if you're used to macrobrew lagers.

Ghost River Hefeweizen had classic citrus flavors and spice aromas. Think cloves stuck in an orange around the holidays. It tastes great plain, but some people like to serve it with a slice of lemon or orange. Do whatever makes you happy.

Ghost River Brown Ale reminded me a little of Newcastle, in that it's nutty with touches of coffee and chocolate flavor.

Ghost River Glacial Pale Ale was my favorite, because I love a good hoppy beer with a decent bitter profile. Toasty, full-bodied, with a crisp finish.

You can purchase Ghost River beer at the brewery in a half gallon jug, a 5 gallon keg, or a 15.5 gallon keg. Or check out one of the many bars and restaurants around town that have begun carrying this hometown beer.
Posted by Benito at 12:59 AM

I had SEVERAL Ghost River Golden Ales at Young Avenue Deli in the Cooper/Young district and I have to say it was Incredible! What a gem of a local beer and it helps the Wolf River COnservancy?!?! Hell, Think Globally, Drink Locally!!

Glad to hear from a local fan! I sort of grew up on the Bosco's beers made on site at the now-closed Germantown location, and gained an early appreciation for beers that had real flavor, personality, and were brewed just a few feet from where I was sitting.

I'm happy to see that so many Memphis restaurants have started carrying Ghost River.

green beerThis phrase goes to context and experience. :-) What I mean is that when I read those words I think of Budweiser not the environment.

When TWC was a vagrant yoot we always thought that Bud tasted like it was 'green'. Green beer. We didn't realize that it is rice beer, which is the flavor we associated with the beer that we knew something was wrong with.

Can't get used to this new blogger tweak that screws up the paragraph spacing in the comments.

I don't really see the term taking off anytime soon, but it seemed like a good fit for this post. :)

I've been to the Budweiser brewery in St. Louis and the Coors brewery in Golden, but the small facility tours are always so much more interesting. It's great that these days you can find decent local beer in most parts of the country as long as you're willing to ask for it. It's also great when a local beer is able to go national without compromising quality--think Shiner and Fat Tire.

I'm with you on the hoppy beer front, my favorite is Stone Brewing IPA, great for everyday drinking...do you have Stone in your area? I know they have it in Louisville so I'm guessing they have it in your area as well. If you are ever in San Diego you should take a tour there, cool place, great beers and really good food!

Stone's a good one. We don't get the full range of beers here, but the more popular ones like Arrogant Bastard are easy to find. I reviewed it back in 2006.