I'm going to try to avoid puns and bad jokes in this post, but feel free to go nuts in the comments. 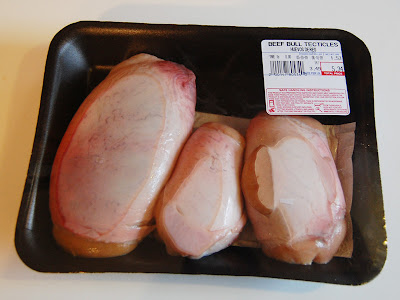 In the grand tradition of nose-to-tail dining, using every part of the buffalo, and searching for new flavors and cooking adventures, I eventually arrived in the international market staring at a package of bull testicles (huevos de res). Among the thoughts that raced through my mind were, "Why are there three of them, and where in the hell did that big bastard on the left come from?" With a dinner party approaching and a few adventurous diners, I decided it was time to cross this particular ingredient off my list. And for the amusement and education of my readers, I'm going to provide step-by-step instructions. 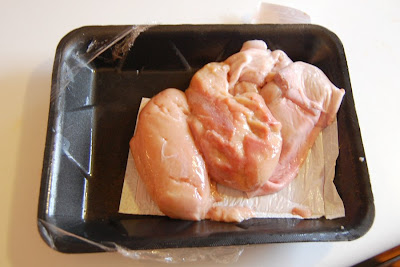 The big one (El Gordo) weighed nearly a pound. Holding it was a humbling experience. Sort of like how staring into the night sky throws things in perspective.

The first step is to peel away the membrane. It's tough, it doesn't want to come off, and the whole mass is so slippery that it's miserable all around. In fact, I could only peel the two smaller ones--El Gordo was so tough and unwieldy that I tossed it aside, and it will be ground up for dog treats at a later date.

Once the testicles have been peeled and the various ducts have been trimmed, they start to look a lot less weird, more like some cut of poultry than the nether regions of a bull. 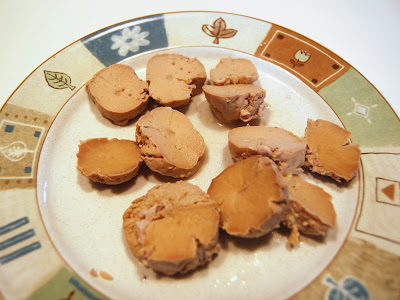 Since I figure the Spanish know their bull parts pretty well, I decided on criadillas fritas, one of many preparations in regions fond of bullfighting. The first step in this recipe involved simmering the peeled testicles for ten minutes with onion, pepper, allspice, and a dash of white wine vinegar. Remove the testicles from the water and cut into quarter inch slices. As you can see in this photo, they look somewhat like liver at this stage. Get your oil ready, and set up two bowls, one containing either a flour mixture or breadcrumbs, and another with an egg wash. Dip in the egg wash, dip in the flour or crumbs, and then fry to desired brownness. 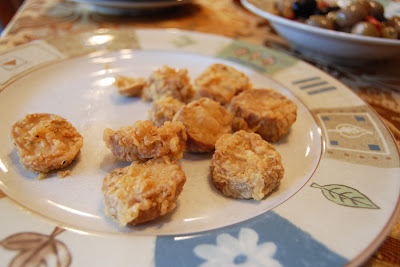 Here's the finished product. Doesn't look any scarier than a pack of chicken nuggets, right? I served these simply to three of my friends as an appetizer with cocktails. All started out with just one, and upon discovering that they were not terrifying, had more. None were leftover at the end--success! Several of us found that they were much better with hot sauce. It's not a matter of covering up any flavors, but they're a little bland and needed something extra. More than anything they taste like fried chicken livers, just minus the heavy liver flavor. The texture is nearly identical, a little mealy.

I'm glad I conducted this kitchen experiment, but I don't see myself doing it again anytime soon. The flavor's nothing to get excited about, the peeling/cleaning is difficult, and the mere mention of this project scared off several potential dinner guests. But I've always maintained that there's more to life than just pork chops, chicken breasts, and hamburgers. Cast your net a bit further, and try some of the obscure delights that are permitted by your religion and local laws.


Photo credit for the first two pictures go to my friend Paul, who was holding the camera and cracking jokes while I tried not to cut myself.
Posted by Benito at 12:36 AM

Nice ball handling...sorry, watching the playoffs. You are far more curious than I my friend, dig that about you! So what cocktails, (which feels funny to say now....) did you serve with your friend naughty bits?

Congrats on breaking out the jokes early! I intentionally left out the names of any wine or spirits consumed during this culinary adventure, as I figure the various producers might not appreciate the association and inevitable Google searches. However, if I had to do it all over again, they would have paired quite well with a good hoppy beer like an India Pale Ale.

Oh, and I meant fried...not that you would do anything to your friend's naughty bits. Playoff NBA games and posting, not so much the best pairing. So IPA for fried bits of bull junk, good to know!

A real man would have harvested his own bull testicles. :-)

I'm not exactly in beef country. Though I have heard that the walnut-sized testicles harvested while castrating calves are the most prized.

While researching this ingredient, I found all sorts of crazy recipes, involving the testes of ostriches, goats, pigs, horses... you name it. There's an entire cookbook written by a Serbian chef, and you can preview a few recipes online for free. The pizza looks positively revolting.

HHHmmmm....I think I will make bull testicle dirty rice;being partially from Louisiana, and your comment of the chicken liver texture/consistency makes me think of dirty rice.YUM!