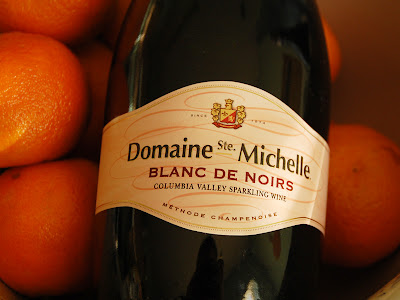 Every year on January 25, Scots, people of Scottish descent, and folks who simply want to eat, drink, and be merry gather together to celebrate the memory of the immortal Robert Burns. There's a lot of ceremony that goes along with such a gathering, but I won't go into much detail here--it's one of those things you have to experience rather than read. And yes, I happily threw out phrases in a proper brogue here and there, much to the amusement of the assembled guests. Though I scrapped the plan of wearing a sword and kilt. That would be fine if I were simply Master of Ceremonies, but with all the cooking and running around I was bound to injure myself or a dog.

Since this year marked the 250th birthday of Burns, I thought I ought to host my own Burns Night gathering. Yes, it would involve making a haggis, but I'm of partial Scottish heritage and have a certain familiarity with organ meats. My buddy Paul was willing to host, and I locked in eight other friends and family members. And just to keep things interesting I decided on an all-Pinot Noir night, since over the past year I'd managed to accumulate a bunch of Pinot that wasn't simply red wine. 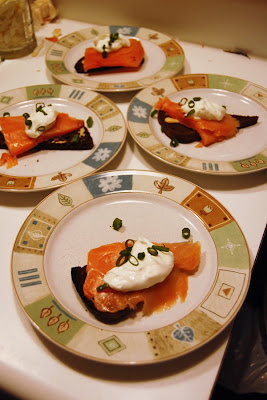 We started things out with the NV Domaine Ste. Michelle Blanc de Noirs, $13, 12% abv. Columbia Valley of Washington. This is really my go-to bubbly, and if I could just keep a few cases around the house at all times I would do so. It's got a ripe strawberry profile, with lemon hints, and its pale salmon tint is beautiful. There's enough body here to stand up to a wide range of foods, and for my first course I took a slab of smoked salmon (thoughtfully provided by my parents) and made little open-faced sandwiches. Start with a base of toasted rye, add a spread of Dijon mustard, then smoked salmon, topped with sour cream and a few rings of green onions. My brother remarked that it tasted like a really good ham sandwich--and indeed, if used properly smoked salmon can serve as a delicious (and kosher!) substitute for various cured pork products. 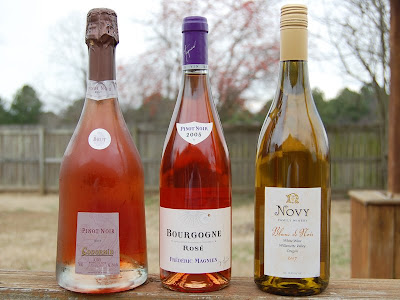 Next up on the wine list was the 2007 Novy Blanc de Noirs from the Willamette Valley of Oregon (on the far right in the photo). $26, 13.9% abv. A real freak of the wine world: a still white wine made from Pinot Noir. I first heard about this from Michael at Midtown Stomp and I had to swing by Joe's to grab a bottle. It's been painful waiting to open the bottle, but what better occasion than a Burns Night dinner party? This was probably the star of the night, with butter and vanilla aromas with a smooth, round mouthfeel. It has a beautiful golden color with just a tint of peach. This is really spectacular but I don't expect to see much of it in the future. 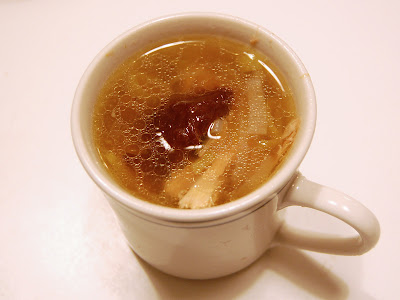 This amazing wine was served with the minimalist cock-a-leekie soup. It's almost Japanese in its simplicity: just a chicken boiled in water with peppercorns and the green parts of leeks. Strain and return the chicken meat to the pot with prunes and the white parts of leeks. Remove most of the fat and serve. As usual, I served the soup in mugs for the sake of dishes and portion control.

I made a fresh salad fortified with raw leeks and fennel and served it along with the first Pinot Noir, rosado Cava made in Spain. This oddity is the NV Codorníu Pinot Noir, a chunky sparkler that won't fit in your wine rack any time soon (far left in the above photo). But as Queen wisely told us, fat bottomed girls, you make the rockin' world go 'round. Ahem. Apricot and peach flavors with a touch of raspberries. 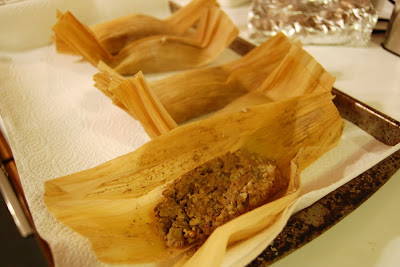 The story of my haggis is pretty long, but I'll keep it short here. While traditionally the entrails are minced and stuffed inside a sheep's stomach, I elected to use corn husks instead. That's right: HAGGIS TAMALES. Why? They're already in single-serving sizes and are perfect for holding the filling together during a long period of steaming, the ideal semi-permeable membrane. Some may consider this blasphemy, but I found the solution far better and, in the grand economical tradition of Scotland, far more appropriate than purchasing a pre-made haggis or attempting to assemble all the original parts. Besides, there's a long tradition of haggis being adapted to local ingredients.

For my wee haggis I used beef heart, beef liver, and leg of lamb along with onions, steel-cut oats, and some seasonings. Instead of the traditional "boil until grey and flavourless" method, I just browned it all in a skillet, let cool, and then ground the mess in a food processor before stuffing in the husks. I was very happy with the results (having tasted both domestic and imported haggis in the past), but the flavor is pretty much like meatloaf or sausage. It's not quite as scary or exotic as most people think.

Before serving the haggis I of course had to recite the Address to a Haggis in the proper Scots dialect.

For a sauce--one of the unexpected successes of the evening--I just heated up two jars of red currant jelly with Dewar's Scotch. I was surprised at the reaction: aside from my father and me, no one at the table had had haggis before, and almost all enjoyed it. I poured a French rosé from Burgundy (middle photo): the 2005 Frédéric Magnien. This one was really liked by many at the table that hadn't preferred some of the previous selections, and had raspberry and lemon elements to it. While that sounds tart, it was quite smooth and refined. 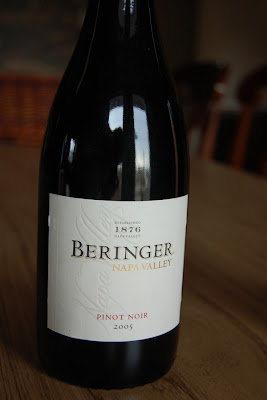 For the alternate main course (I really hadn't expected so many people to eat all their haggis), I roasted Paul's leg of lamb stuffed with rosemary and garlic, and served it with roasted cubed potatoes and rutabagas. The side dish is the traditional Scots "neeps & tatties", but I chose to roast the root veggies with olive oil and a dash of maple syrup rather than boil them into a bland mush.

More haggis sauce was poured over the lamb, and we uncorked the last wine of the evening, the 2005 Beringer Napa Valley Pinot Noir. $20, with very ripe strawberry characteristics, a round flavor that was really bold and firm after all the "weaker" Pinot variants we tasted. I think this would be a great introductory Pinot Noir for anyone that wants to get to know the grape. 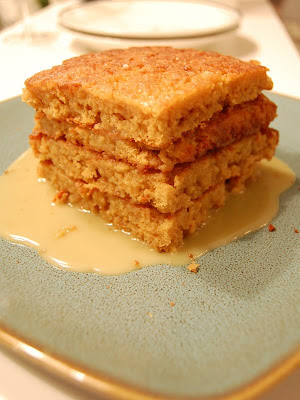 Bear in mind that I took pauses of 15-20 minutes between courses, no reason to force this much food and wine into people quickly. For dessert, we feasted on Dad's bottle of The Macallan 12 Year Scotch. Nice and peaty, with smoke and spice elements like nutmeg and a hint of cinnamon. Macallan is a dependable producer and I was proud to have it at the table.

Continuing with my theme of not liking to cook dessert and the fact that by this point in a dinner party I'm running low on steam, the Squirrels once again saved the day with a honey cake, made with Scotch and topped with a Drambuie glaze. We each just had a small piece but it was the perfect way to cap off the evening.

All in all it was a great evening. I enjoyed making haggis for the first time, and having the poetry and history associated with Robert Burns really helped tie everything together. My thanks to all those who helped out with the dinner, both by contributing items and being willing to eat the finished products. My first Burns Night was back in '94 with the Memphis Scottish Society, and I'm glad to have hosted the first one for so many of my friends and family.
Posted by Benito at 12:05 AM

Ben,
Thanks for the evening. Well planned, good pairings and great people.
Allen

haggis tamales sound like a franchise option to me.

sorry we had to miss the grand occasion.

Benito,
Sounds like a wonderful event and as an Irish girl I appreciate the whole tribute to one's heritage part...not to mention updating dishes from places that are not known for making food that most people want to eat, haggis tamales...dude, wicked smart!

I have a bottle of that Cava Rose that has just been stiing on my desk waiting to be sampled so after reading your notes I'm gonna get on that!

Next year I'm thinking about taking the haggis tamale idea a little further, making it a little more South of the Border. Maybe using chicken hearts, gizzards, and livers with epazote, or grinding beef tongue in the mix with a traditional masa coating.

I didn't invent the haggis tamale, but searching for one on Google will only get you a couple of hits. I'd considered using a plastic oven bag, or a cotton t-shirt, but corn husks ended up being the most pragmatic option.

Ben
You never stop amazing me!! Now I know what wine to serve with Haggis!! Pinot... You are the best
Big Mike