Kids, don't try this at home. 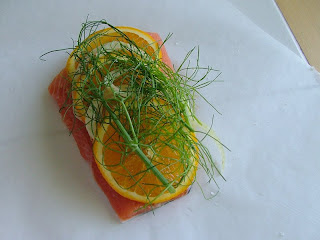 Cooking something en papillote just means that it's in parchment paper. There's some cool ways to do it so that the little origami-folded envelope of paper puffs up during cooking creating a delicate steam chamber, but I wasn't going that fancy.

First off, I coated the filet with a smear of chipotle-flavored mustard, added some sea salt and black pepper, and then topped it with thinly sliced oranges and fennel bulb as well as some of the fronds for additional flavor. I folded up the parchment, sealed it in a few layers of aluminum foil, and then prepared my heat source. 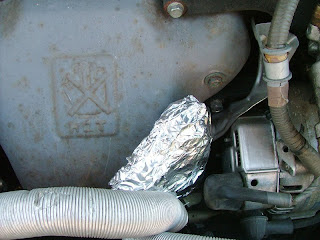 The 1993 Honda Accord has a cozy spot between the exhaust manifold's heat shield and the alternator. The Honda engineers were kind enough to label the heat shield with "HOT" stamped into the metal. The second law of thermodynamics dictates that an engine will produce waste heat. Normally this disappears through the exhaust system or simple thermal radiation through the hood. However, the laws of physics don't prevent you from capturing some of that waste heat for culinary purposes.

Salmon makes a good choice for this style, since you can eat it raw and it's difficult to overcook, leaving a lot of wiggle room between those extremes for an edible dish. I cooked it while running errands for about 40 minutes. Even when I had to run into a store, the salmon was still cooking. It takes a while for a car engine to cool off. 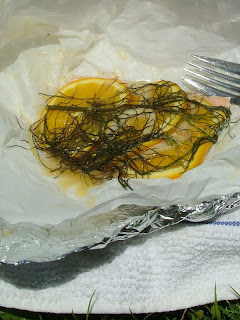 I stopped at a park, grabbed my bottled water and removed the foil pouch from the engine (carefully, mind you--I'd brought along a towel to use as a hot pad). It was delicious and perfectly cooked, nice and pink with delicate flaking. Moreover it was moist and properly seasoned from the aromatics. Not a hint of 10W40.

The authoritative work on the subject of cooking in car engines is Manifold Destiny by Chris Maynard and Bill Scheller. I haven't read it personally but have seen excerpts. Further techniques and details can be found around the web, but here's some general tips:
Posted by Benito at 12:47 AM

One of your best post's, your grandfather is going to be proud.

This was very informative. I have heard of cooking potatoes in the dishwasher (sans soap), but not of using an automobile engine. Thank you for sharing...

I am now looking at my clothes dryer as an entire new source for bachelor cooking and cuisine. Imagine the look on my next date's face when I pull your recipe out from the sweater rack!

Thanks for the new idea!