While staying at the R house this weekend, Dave found a rare treasure hidden in the back of a liquor cabinet: the 1993 Sutter Home White Zinfandel. At its birth this was a sweet pink wine meant for quick consumption and no aging. So what happens when it's held at a stable temperature for 14 years and uncorked amongst a group of curious wine lovers? 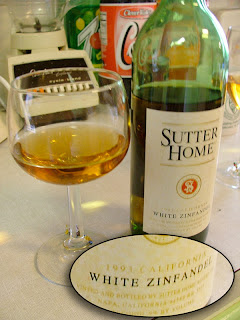 As can be seen in the photo, the wine turned a shade of amber over time. (I made a zoomed inset for ease of reading the date.) I typically avoid White Zin these days, not out of elitism or snobbery but just because I don't care for the heavy sweetness. But this oddity passed the sniff test. It didn't smell like vinegar, it wasn't oxidized, and it wasn't corked. In short, it wasn't flawed and probably wasn't dangerous. The only thing left to do was try it out.

Over the lips and past the gums,
Look out stomach, here it comes.

The bouquet was somewhat like Madeira with a certain "cooked" profile. Surprisingly the sweetness had largely disappeared over the years and had been replaced with an interesting acidity. I'm not going to say that it was good, but it certainly wasn't terrible. I had about half a glass before pouring it out. Dave suggested that it would be great in a salad dressing, so when I got the opportunity, I slipped some into the vinagrette for the frisée aux lardons.

The best part about this particular tasting is the bragging rights. For the rest of the weekend there were many jokes along the lines of, "That was a great Bordeaux, but it's no '93 Sutter Home..."
Posted by Benito at 12:32 AM

..... boldly going where none has gone before.

Ben, I had no idea of your love for older white zins! When we moved I found 2 bottles I need to get to you for testing, as you are much braver than I! I found a 1985 Nuevo Beaujolais and a 1985 Deer Valley White Zinfandel. You being the master of older White Zins I would love to see you and your friends have a shot at these treasures? I love a guy who walks the walks. Maybe we will taste them together, with Fredric?? Off to Napa next week talk to you when I get back.

Who would keep a rose so long? I wouldn't have even sipped it given the age and colour...

Fredric: I was torn between my love of good wine and scientific curiosity. I'm still alive, and I think I'll get a lot of mileage out of this story.

Mike: I'll give 'em a try, but if they fail the sniff test they're going down the drain.

Andrew: It was purely by accident. The bottle had been dropped off as a gift back in 1994 and forgotten since then.

A couple of years ago on an online forum I told the story of the famous Pistachio Liqueur. I'll save the details for a future post, but somebody warned me that I'd "always be known as the guy that drank Pistachio Liqueur". (Please note the past tense.)

Something tells me that an editor of Wine Spectator or Saveur is out there looking around for an amateur blogger to write a monthly column, and upon seeing this post, he or she will recoil in horror and move on to the next writer.

Oddly enough I've got two bottles of 1993 Sutter Home White Zinfandel myself. My parents had them collecting dust on their wine rack and I just noticed them when we were moving their stuff.

I was quite amused to find this little story, considering, but now I'm fairly sure that they're better bookends than beverages.