Andrew's hosting yet another round of Combinations... For Combinations #6, we're tasked with preparing Roast Partridge with Grapes and Walnuts and matching an appropriate wine. First off, in gathering the ingredients for this recipe, I found myself purchasing raw grapes for the first time in... I can't remember. I've eaten grapes occasionally in the past decade, but it seems I only buy them in their fermented and bottled form these days. I'm reminded of the Scotsman who, fond of the deep-fried pizza of his home, goes to Naples, is served a perfect pizza margherita, and exclaims, "D'ya expect me to eat it raw?"

Speaking of the raw grapes, I used Sable Seedless, which are black as night and taste great. I couldn't help but be curious about what kind of wine they'd make. (And yes, I know that wine grapes often don't taste all that great and that table grapes make crap wine. Still curious.) 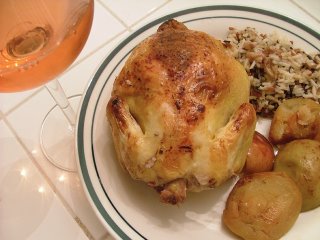 We have partridges here in the States, but they're actually a species of quail. (Couldn't get my hands on any farm-raised quail--my local supplier for farm-raised game went out of business.) Right now we're at the end of dove season, and while I wouldn't have been averse to going out and shooting a brace of doves with the trusty 16 gauge, I haven't had the opportunity to get out in the fields. Grabbing a pigeon from the street didn't seem too appetizing, and I wasn't going to try to snare one of the mourning doves out of my backyard. Doves don't really have much meat on them, though, and looking at pictures of European partridge dishes, I figured my best bet was going to be Cornish game hen, basically a very small breed of chicken.

I don't know how popular these are overseas... Here they're available everywhere, and very inexpensive (yet ridiculously expensive at restaurants/catered events). Most people get them frozen, but I was lucky to pick up some fresh ones. Some people like to cook them for small Thanksgiving dinners, because they cook rather quickly and there's not a ton of leftovers.

Brief anecdote: I first cooked Cornish game hens back in high school when I was going through my first cooking experimenting phase. I prepared them in an Italian manner with a sausage-based stuffing. They turned out delicious--I made one for each member of our family. Mom looked down at hers and almost got upset. "But it looks like a little baby chicken... I don't know if I can eat this." Surprisingly, over our lifetime, my mother has rarely had to force me to eat anything, but there's been several dishes I put in front of her that she didn't want to touch. Love you anyway, mom.

I followed the recipe closely, except I used some of the chosen wine instead of the Madeira and substituted a multicolor rice blend for the side dish. I also included some honey and cinnamon baked apples as an additional side. More on the apples in a future post, as they were an unusual variety. 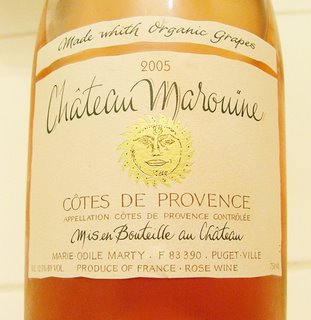 For the wine, I picked the 2005 Château Marouïne Côtes de Provence Rosé, obviously from Provence in France. Alder gave it a good score at a big rosé tasting. It's also fully organic, which is sort of amusing as none of the other ingredients for dinner were organic. 28% Grenache, 26% Cinsault, 26% Mourvèdre, 20% Carignan. Kudos to the winemaker for putting this information on the back of the label! What a lovely Southern French blend.

The first thing I thought of when purchasing the bottle was James Ivey's Extremely Pale Rose: A Very French Adventure. I haven't read this book, but saw mention of it on some wine blog and can't wait to get my hands on a copy. This is indeed a very pale rosé with just a slight orange tinge. Think of a white wine to which you've just whispered something naughty. Flavorwise, it's crisp and tart. Not sweet at all, but well balanced. Tasted blind, this could easily pass for a white wine. Very light flavors of pear. Easily drinkable, perhaps too light and refreshing for this autumnal dish. As it hit 91°F (33°C) here today, I feel entirely justified in this selection.
Posted by Benito at 3:45 PM