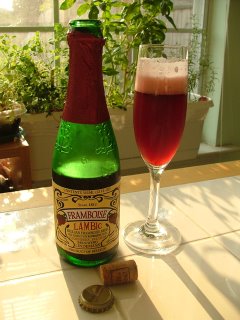 Confession time: this is the first time I've ever had a fruit lambic. I had been a little leery of these over the years, assuming that they would be overly sweet. But a trusted friend demanded I try one, so I picked up a bottle on the way home tonight.

For my first lambic, I chose the Lindemans Framboise Lambic. Obviously this would be a great dessert beer, going well with things like cheesecake or chocolate, but I just had it alone after dinner. Tremendous flavor. The purest, most delicious concentration of raspberry flavors you can imagine, but not any sweeter than real raspberries. Instead you get firm tartness and some earthiness from the hops underneath.

As you can see, it pours beautifully. And in fact, if you didn't know it was a beer, you could probably sneak it in behind something like an Italian brachetto d'acqui or spumante rosso without arousing too much suspicion. Though it's a little pricy for a beer ($6 for this 355mL bottle), it's still cheap compared to a bottle of wine. The store I went to also featured a peach version; I can't wait to try that out.

One last note: this came with a cork and a bottle cap, as you can see in the photo. I've seen some beers that use a champagne-style enclosure with a mushroom cork and a wire cage, as well as some that use a clasp and a rubber or plastic stopper. The cork shown above was smaller than a regular wine cork, and was composed of lots of small bits of cork like a champagne cork, but without the natural disk at the bottom.
Posted by Benito at 12:22 AM

This stuff really is surprisingly good. As you say, there is also Peach (peche), which I have not tried. There is also Apple (pomme) and Cherry (kriek), both that I have tried, and both are very good as well. I believe I like Kriek best of those that I've tried and recommend it highly.

The place where I first experienced a Lindeman's Lambic has the Framboise variety on draft, so we sampled it then bought a pitcher. The lovely waitress didn't realize she was supposed to use a much smaller pitcher to correspond with the smaller glasses used to serve this type of drink, and so we got about double or triple as much Framboise as we were supposed to be getting for the price. Heh, that was memorable for the sake of the beer alone, and that great discount makes it even more memorable.

But I digress... my point is, it's available on draft, but I don't know where I can buy kegs for myself, and I hope someday to find out.