It's time for Combinations #3, hosted by the chaps from Leeds. I missed the second one--a combination of work and forgetfulness got in the way, but Andrew was kind enough to remind me about it this month.

Speaking of which, if you go to Andrew's site, you can see the official Combinations logo, which I designed. I submitted a handful of designs to Andrew, he picked one, I refined it, and you can see the final result:

And here's my favorite alternate: 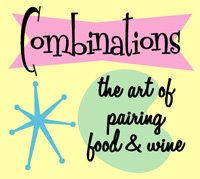 And the one that was probably a bad idea from the start: 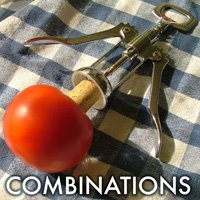 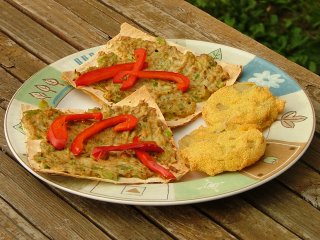 On to the food! I managed to find most of the ingredients, even though I came up dry on my first visit to my favorite Persian-Turkish place. The lady of the shop gave me directions to another supplier, and in thanks I bought some baklava and assorted desserts. (I felt bad since upon seeing me enter she almost started making my standard döner kebab.) Upon arrival at the next place, I asked for lavash and za'atar. She didn't know what I was talking about, despite being from the region. I walked down the aisles with her, and found the za'atar. In the frozen section, she pulled out what looked like a baguette, and I said, "No, it's a flat bread." She began to hand me a bag of rolls when I found a few dozen flat bags filled with lavash, and with the word "Lavash" in big letters on the front. At the shop I also picked up some pisatchios sans shells. I couldn't find any sumac, but I could see plenty of the little red bits in the za'atar. I'll be giving the rest of the huge jar of this spice to my Syrian friend.

Way back in the day, my mother and grandmother used to occasionally brew sumac to make a sort of tea or "Indian lemonade", due to it's acidic and bitter flavor before adding sugar. Sumac grows wild all over the Mid-South, and everybody takes it for granted. Though the occasional hippie or art student will grab some for an herbal cure or pigment.

I made some slight modifications to the recipe: I used my homegrown chives instead of green onions, and I used minced green pepper for the chicken mixture rather than red. The original recipe from the New York Times suggests squares of six inches or fifteen centimeters. This provided me with twelve squares, and Paul and I consumed two each. Also, for the yogurt sauce (not pictured), I added a handful of my fresh mint, which provided a nice kick. And just because I could, I decided to pair the meal with fried green tomatoes.

Despite doubling up on all the spices and adding a lot of Tabasco sauce, I still found the meal dull. It wasn't bad, and it was definitely filling, but somehow the chicken mixture just didn't work for me. I really found myself craving a bit of tomato sauce and cheese to help it be more like a pizza. That may have something to do with my childhood friends of Lebanese descent, whose parents used lavash to make all sorts of fun fusion cuisine. (I also think this dish would have been better with lamb than chicken--it just needed more oomph.) 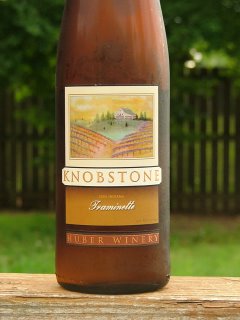 The wine I chose was actually a gift from my friend Tom, who dropped it off on his recent visit. I speak here of the 2005 Knobstone Traminette from Huber Winery in Indiana. Traminette is a Gewürztraminer hybrid. My previous experience with the grape was not pleasant, but this is fantastic. It tastes very much like a classic Gewürztraminer, but with a drier, crisper, and more lemony taste to it. As something of a random choice, it paired quite nicely with the Middle Eastern fare. The aroma is floral and mild, and the taste aside from the aforementioned spice and lemon has good elements of honey, with just a hint of acidity to keep things interesting. An excellent wine all around.
Posted by Benito at 5:31 PM

An interesting wine choice; I don't think I have come across Traminette before.

And many thanks for the logo; feeling quilty that I haven't given a full plug to your excellent graphical abilities!