While in Cleveland on my most recent trip, I vowed to try wines from beyond the mainstream wine-making regions, bottles from places not represented in Memphis wine shops. I've got two reputations to uphold: 1) being willing to try any grape at least once; and 2) being willing to review the oddballs that will never appear on the cover of Wine Spectator. If the title isn't showing up properly, just go to the top of your browser window and hit View --> Encoding --> Unicode (UTF-8). 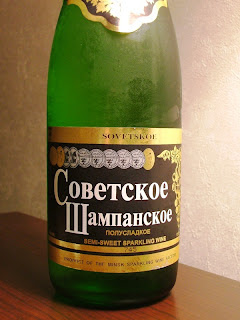 My first selection was from the Republic of Belarus, sometimes known as White Russia and the only part of the former Soviet Union that's moving back to its authoritarian Communist past. It is now my dubious pleasure to introduce the non-vintage Советское Шампанское, pronounced "Sovetskoye Shampanskoye" and translated as "Soviet Champagne". $12, 11.5% abv. I guess it's a kind of blanc de blancs made from Aligoté and Chardonnay, but there's no telling what strange varietals were used. Nothing inspires confidence like "PRODUCT OF THE MINSK SPARKLING WINE FACTORY" on the label.

Slightly sour tone on the nose, with a touch of yeast. The aroma is somewhere between beer and sourdough. Not what I'm wanting in a wine. It actually tastes better than it smells. Sweet, with a little apple cider flavor. While I tried it on its own, I followed the dessert theme and enjoyed it with a piece of tiramisù and some fresh fruit. The cake and fruit were better than the wine.

Final verdict: Well, if you lived under the iron fist of Communism and this was the only sparkling wine that you ever got to drink then it's not a bad bubbly and I've definitely had worse. On the other hand, any domestic sparkler equal to or greater than Korbel is going to be a far superior experience, and anyone wishing to save money by serving this at a wedding is going to get a lot of nasty looks. 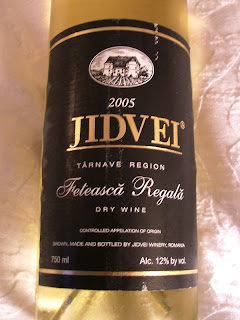 Continuing with the Eastern European theme, I couldn't pass up the 2005 Jidvei Fetească Regală from Romania. $10, 12% abv.

Fetească Regală is the grape varietal and means "Royal Maiden". Jidvei is a part of the Târnava wine region in... TRANSYLVANIA! Somebody better get a creepy label for this and start marketing it to college-age goth kids. Include a tube of black lipstick free with every bottle.

It's got an unpleasant aroma, a sour tone that reminds me of the stuff from Belarus. At least it's dry, but the dominant flavor is a sharp tangyness. Before tossing it out I tried it over ice, where the harsher notes were subdued and it developed a decent peach flavor. 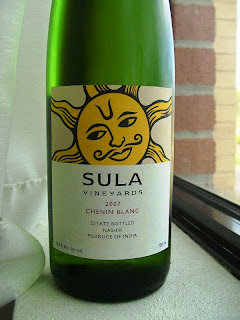 We complete our voyage in South Asia: the 2007 Sula Vineyards Chenin Blanc is from the Nashik region of western India. $11, 12.5% abv. It's got an earthy and floral aroma. Kind of like magnolia blossoms or jasmine. It's dry with a round fruit flavor of pears, and a short clean finish. I find myself wanting a bit more acidity, but perhaps that balance would come with proper food matching. I tried it with pita, hummus, and some marinated seafood salad from Whole Foods that included squid, octopus, shrimp, and other denizens of the deep.

I'm guessing it would pair pretty well with Indian food, but that's like saying it would work well with American food: there's a lot of diverse regions and culinary traditions in a country with over a billion people. I'll be on the lookout for Sula wines in Indian restaurants and try them with something like a spicy lamb curry.
Posted by Benito at 12:06 AM

well that was definitely an adventurous attempt at tasting the products of minsk factory of technical wines. Local price for that semi-sweet stuff is about 4$, which is still a ripoff (imho)... I would suggest you stay away from trying anything else that might find it's way to US shelves from Belarus, since it does not grow grapes (or first check with your health insurance :). Vodka may be different and few local varieties fare quite well.
The cheapest "wine" that I've seen there was priced at about 70c/700ml, but I wasn't crazy enough to try that...

Of other things, try desert wines from Tokaji

you are intrepid.
i was in Leningrad for a week in sept. 1990, the year before the city changed back to being St. Petersburg. The ONLY alcoholic beverages available in the city, at every restaurant we went to, were Bud Lite(!) and "champagne" from Ukraine, or as it used to be The Ukraine. Desp[ising the former, I almost got used to the latter, which managed to be bland, sweet and metallic simultaneously.

In case you wish to enjoy a major celebration or just have a good chat in a excellent company, you can try dry white wine here as an option, it is worth the cost!

There are many ups and downs in life, but those who struggle never lose, you have written such a beautiful post that I have been encouraged to struggle more by seeing this post, I also want to write good posts like you, the design of this post. It is very beautiful and the content that you have written in this post is even more beautiful.
looking call girls in gurugram
girls in gurugram
gurugram call girls booking
Call Girls in Bandhwari